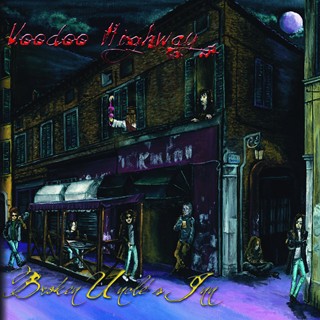 Production:
Produced and recorded by Luca Magni. Mixed and mastered by Simone Mularoni.

Review:
On the face of it this album, Broken Uncle’s Inn, ticks all the right boxes. With more than a nod and a wink towards MKII Deep Purple, especially in the massive organ department, this record transports you back to a time when sweater vests and loon pants ruled the world.

Tracks like “Runnin’ Around” are not so much influenced by Deep Purple‘s “Highway Star”, as more like taking all the same notes and playing them in a slightly different order. But this debut album from Italy’s Voodoo Highway has grown on me. It’s not an immediate smash, and it’s taken me the best part of two weeks to get to grips with what these guys are doing. They’re not the tightest unit, but the looseness of what they’re doing fits the mood very nicely. The obligatory slow number, “Heaven With No Stars”, is a really nice change in pace with a huge, sweeping orchestral crescendo reminiscent of Guns N’ Roses‘ “November Rain” — but better.

My main criticism of this offering is that the vocals sound strained at times (not really surprising if you’re gonna try to emulate Mr. Ian Gillan) and that there really needs to be more guitar — or at least turn them up a tad to balance out the superb keyboard tinkling skills. Having said that, the solo on “The Fire Will Burn Away” is as good as anything Ritchie Blackmore ever did in the early seventies… so go figure.

Every one of the tracks on Broken Uncle’s Inn wouldn’t look out of place on Machine Head, In Rock or Fireball. It’s kind of a shame that Voodoo Highway don’t stretch their wings a bit, as they cite their influences as Steely Dan, The Doors, The Allman Brothers, Stevie Ray Vaughn, CCR and Lynyrd Skynyrd — so, it would be nice to see them wander off into those territories as well as sticking to the well worn Purple path.

If you never managed to drag yourself out of the seventies, still think shag pile carpet is the shit, Evel Kneivel is the daddy, and the 8-track is the future… then check out Voodoo Highway. And get your hair cut you damn hippy!