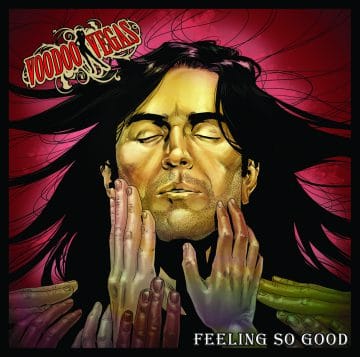 VOODOO VEGAS
FEELING SO GOOD
To be released on November 1, 2019 (PHD)

Review:
UK band Voodoo Vegas have released two previous albums, The Rise of Jimmy Silver in 2013 and Freak Show Candy Floss in 2017, as well as other singles and EPs. The two albums were crowdfunded, so when Voodoo Vegas embarked on the writing and recording experience for Feeling So Good, they again reached out to fans for financial support. Unfortunately, the band got caught up in the Pledge Music debacle and lost thousands that would have helped develop the new album.

Fortunately, the Voodoo Vegas sound was identified by Peter Keevil of TMR Management, and the new album happened after all. Feeling So Good is a decent entry into the late-twenty teens’ pantheon of sleaze rock.  There are elements to several songs that immediately capture my attention.  “Don’t Need Your Love” and “Puppet” for example, are a more modern reflection of Hardcore Superstar or The Last Vegas.

“Pretender” has an opening bass and guitar line that reminds me of the old L.A. Guns track “Sleazy Come.”  There’s a playfulness in the writing and performance that is really fun and raunchy. The stomp-clap meets dark acoustic of “How Much Is Enough” does intrigue me, and the song is pretty good overall.  I will question the nearly six and a half minute run time however. Quite unusually for this deep into an album, track seven “World Keeps Turning” clocks in at just over a minute of bland nothingness before “Who I Want to Be” kicks in.  The up-tempo enthusiasm is fading toward some slower, plodding but heavy tracks including the latter and “Feeling So Good.” before back to the fun with “Come on Over” with its harmonica and Crazy Lixx style vocals.  Borderline Aerosmith here.

Feeling So Good is a fun listen and memorable for a time. I have enjoyed Voodoo Vegas‘ earlier stuff that still resides on my hard drive, but to be honest, I rarely revisit. The same can be said for this album, perhaps with the exception of “Love Shines”.  There won’t be much to keep me coming back to this album a year or two from now… which should not distract from the here and now.