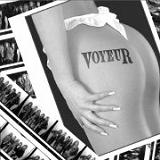 Review:
It never ceases to amaze me the amount of great hard rock bands that got left unnoticed in the wake of the dreaded ‘G’ word that was Grunge music, which stole the scene from some excellent 80s rock bands. Voyeur is another band who got pushed aside and left in relative obscurity because of it. Thankfully some record labels are trying to get the overlooked music from that time out there into the now. SunCity Records have again cast their ever growing net and picked up another all but forgotten band.

Opening song “Cast The First Stone” is an instant favorite, but “Strutter” is easily one of the best songs on here and I could listen to this again and again. It also has commercial hard rock bliss written all over it, if only radio stations would bother to play music of this genre.

Ballads usually bore me but Voyeur‘s “Long Way From Home” has more guts than most. It starts out slow and I felt a yawn coming on, but it builds into a blistering rock ballad. It has the typical cliche ‘away from home I miss you lyrics’, but the music is powerful with some great guitar riffs.

There aren’t really any duds on this disc, but my least liked is “Mindgame”. It just kind of plods along going nowhere and I keep waiting for something to happen and nothing does, but even this has some nice guitar work in it. Voyeur remind me of Babylon A.D. or the very underrated Cry Wolf, and vocalist Daren Richards has a Stevie Rachelle (Tuff) sound to him.

The guys in Voyeur don’t explore new territory with Spank Or Be Spanked, but this is a good solid release nonetheless. Oh, and extra kudos for the hot cover art.