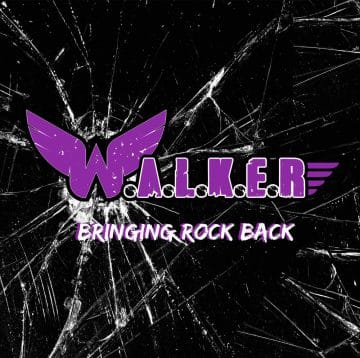 Review:
It’s hard to believe that W.A.L.K.E.R.‘s phenomenal EP Bringing Rock Back almost slipped through the Sleaze Roxx cracks. Yes, I was familiar with W.A.L.K.E.R. having posted three articles about the band in the last year but as is often the case, I listened — but didn’t really listen — to the songs from which their videos were derived from. Luckily, Perris Records released its latest compilation album Hollywood Hairspray Vol. 8, and the one real standout while I listened to the CD was W.A.L.K.E.R.‘s track “Time To Party.” That song made such an impression on me that I had to purchase W.A.L.K.E.R.‘s presumably debut EP Bringing Rock Back.

Granted, “Time To Party” starts off sounding an awful lot like the intro to Skid Row‘s “Monkey Business” but it soon turns into the type of anthem that a band like Warrant would have cranked out in their prime. I will go out on a limb and state that “Time To Party” is so good that it would be in the top three songs of many bands’ repertoire. The track is catchy, full of great melodies, lighthearted, upbeat and simply a lot of fun. The real question that I had in my mind when purchasing W.A.L.K.E.R.‘s EP Bringing Rock Back was whether the rest of the songs would even come close to “Time To Party.” As it turns out, W.A.L.K.E.R. released videos for three of the five songs on the EP but I didn’t remember that when I purchased the EP. In fact, I didn’t even know how many songs were on Bringing Rock Back. I simply knew that I wanted to hear the rest of the songs on the EP. As it turns out, all five songs on Bringing Rock Back are excellent and if you’ve read my reviews, it’s not often that I say that. In fact, it’s kind of rare for me to state such a comment.

The second track on the EP is the title track and it lives up to its name — “Bringing Rock Back.” Starting with a rather straightforward guitar riff, the song builds up pretty quickly before lead vocalist Glen Walker‘s almost subdued vocal delivery kicks in. It almost feels like Walker is talking to you except he’s singing before the rather simple but effective chorus kicks in. Kelan Hughes‘ guitar solo is a thing of beauty and it is almost surprising how explosive that it is given how laid back the rest of the track is. For those who wished that Tesla could still write slower killer tracks or ballads like they did on The Great Radio Controversy, you just have to listen to W.A.L.K.E.R.‘s “Dreaming of You” too see that the Irish rockers have tapped into Tesla‘s magic of their early years. These days, it’s almost painful to listen to Tesla‘s slower tracks (I still can’t make it through the entire Shock album before having to shut it off out of boredom). In any case, Walker‘s vocal delivery and the melodies on “Dreaming of You” really remind of classic Tesla. I don’t like a lot of ballads these days but “Dreaming of You” really registers and feels like there’s a lot of emotion conveyed into the song.

It’s funny how much I can discover when doing a review on a band. I didn’t realize this but W.A.L.K.E.R. just recently released a video for a fourth song off their EP. “She’s On Fire” has also received the video treatment. Again, the song is pretty simple like “Bringing Rock Back” but shock full of melodies, it’s got a great vibe and it works! Just like on “Bringing Rock Back”, Hughes‘ guitar solo during “She’s On Fire” is probably the highlight of the song. I suppose that W.A.L.K.E.R. will be shooting a video eventually for their EP closer “When It Rains” and they really should because its another excellent track.

The Official music video for Bringing Rock Back !#bringingrockbackThe new EP mixed by Michael WagenerYou can buy a copy of our new EP and merch herehttps://w…

The Official music video for Dreaming Of You. You can buy a copy of our new EP “Bringing Rock Back” herehttps://walkerband.bigcartel.comYou can also keep up …

The Official music video for She’s On Fire !#bringingrockbackThe new EP mixed by Michael WagenerYou can buy a copy of our new EP and merch herehttps://walker…