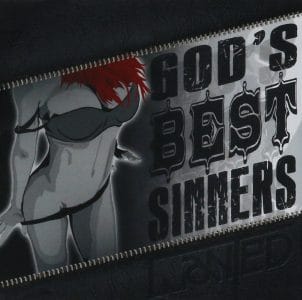 Review:
W.A.N.T.E.D. stand for nothing, near as I can tell, but is a band based in Thessaloniki, Greece.  Beginning with the demo EP Shit Happens in 2004, W.A.N.T.E.D. have released three further full length albums, and taken part in two tribute albums: Don’t Tribute Bad – The songs of Firehouse (2004) and Centre of Eternity – A millennium tribute to Ozzy Osbourne (2012)

I was working my day job today, and thought I’d put God’s Best Sinners on repeat, just for giggles. Figured it would blend into the background and I’d have to listen more intently later. Well, it’s a good thing I get paid by the hour, because I was constantly distracted by this record, for better, and sometimes worse.

“Eats Like You Prey” is a hot little number that includes a touch of keyboards but nothing to override the solid guitar riff.  The opening of “Johanna” recalls such epic ’80s keyboard riffs from Europe, or Vamp maybe.  I can’t think of anything else at the moment, but I really liked it. What a great opening groove! Listen for yourself below. I guess the problem with “The Remedy” is that it is too modern, compared to other songs on this album and is my least favourite, Sesame Street taught me it is one of those things that is not like the other.

“Good To Be Bad” almost has a Judas Priest vibe to the guitars, and a real feel to it. “Something To Do With You” attempts Blackberry Smoke, or Black Stone Cherry southern US rock feel, which I’m not sure this Greek band is pulling off in its entirety. But then Wanted recover by offering “Never Get Me Alive”, scoring points for sleaze guitar combined with newer influences. Even the addition of keys doesn’t hurt this track. It is very much a Slash guitar riff circa Velvet Revolver; sounds great, and there’s a live version below. “Not You” is solid enough with lots of keys that toy with the idea of Deep Purple but not quite going all the way. Fortunately, the guitars save the grind. Finally, the track “God’s Best Sinners” is a decent rocker, floating along and landing the verses, and hitting the choruses with something of a sing-along.

If you want to check out a decent rock album without a whole lot of flash, try W.A.N.T.E.D.‘s God’s Best Sinners.

Music video for the song ‘Joanna’ taken from the album ‘God’s Best Sinners’ (2016)www.wanted.grReleased by Perris Recordswww.perrisrecords.comDirected and ed…

Official music video for the song “Something to do with you”by the band W.A.N.T.E.D. , taken from the album “God’s Best Sinners” released by Perris Records i…