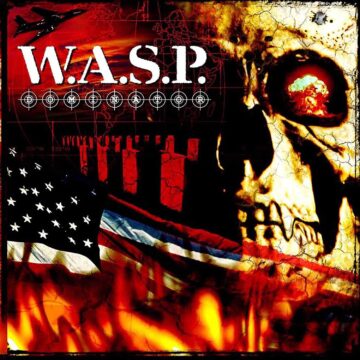 Review:
They say time flies. Boy, does it ever. You know, when W.A.S.P. released Dominator in 2007, it was exactly 15 years after they had released The Crimson Idol in 1992. It felt like an eternity since that album when Dominator came out. And now, it has been just as long between those two albums as it is now as we celebrate 15 years of Dominator! The year 2007 was a rocky one for the world and yet looks like paradise compared to the shit show we find ourselves in now. It is like Antonio said on the TV show Wings once, “Gaze fondly upon today. For tomorrow is bound to suck worse!” So, as we gaze fondly on 15 years ago, let’s talk a little about the meaning behind the album art and some of the songs on Dominator. Shall we?

Blackie Lawless‘ journey through life has found him in many different places. When you scroll through YouTube videos, you can see a man with very different opinions as the years go by. For example, when KFD was released in 1997, Blackie could have passed for being a Satanist in how he represented himself in press for the album. Of course, this was when Marilyn Manson was hitting it big so it could’ve been to borrow from his success. Nevertheless, by 2007, Blackie had settled in as a reborn Christian with very strong political views. The album art, which I don’t care for, features the American flag with flames which puts a fire in my belly just to type. But, it isn’t done in a way to bash the nation or those who served to protect her. Instead, it was a direct shot at the swamp political landscape that ushered in a political change in 2016.

“No Mercy” sounds like a song about a woman. “You wicked bitch, I’ll take you and make you mine.” But, in reality, Blackie was singing about seizing back control of the United States. “Long, Long Way to Go” even includes the lyrics “Bush‘s lies.” For years, I hated that lyric. Now, somehow, as the smoke has cleared, I find I understand it, if not quite agree with it. But, very touchy subject and we shall not go into that.

So, 15 years later, how does Dominator measure up? The answer? It is as good now as it ever was. And, that is pretty damn good.  “No Mercy” has a “Wild Child” like vibe and a driving guitar sound that makes the song while Blackie‘s voice is in rare form. It has aged since the early days but it still has a lot of power and charm. “Long, Long Way To Go” has a drum driven beat that also includes the lines “Bastards! Bloody bastards!” clearly ranting at the political swamp. “Take Me Up” fit the time as it had an Evanescence vibe to it but without that woman’s never shutting up vocals that sound like an overweight teenaged girl choking on a potato. “Burning Man” is another heavily political song that is solid but doesn’t catch me as much.

But, the jewel of the album is “Heaven’s Hung in Black.” “Heaven’s Hung in Black” starts with somber patriotic music music and goes into the incredible song that follows. It clearly has to do with the way career political figures have destroyed the morals and foundation this nation was built on as sung with lyrics such as, “And you’ll know what it’s like, When paradise is blind, When heaven’s hung in black.” “Teacher” doesn’t really connect with me and the second, more haunting version of “Heaven’s Hung in Black” feels like an add on that wasn’t needed. “Deal With The Devil” brings it back to a rock and roll finale while keeping in tune with the album’s overly political messaging.

Political albums for the time were not unknown. Iron Maiden‘s clunker A Matter of Life and Death was highly politically charged as well. The difference was the W.A.S.P. album was actually good. And, it set the tone for the follow up albums Babylon and Golgotha. This became W.A.S.P.‘s sound for those follow up albums and all have a unique place in my heart. Fifteen years. man. I remember wearing a Great White “25 Years of Rock” shirt and thinking, “Man, 25 years. That was so long ago!” Well, that was 15 years ago as well… I guess we’re all getting older. But, albums like this which was not from the “glory days” still has a massive place in this W.A.S.P. fan’s heart and mind. A great album with a divisive message that still is unsettling today. But, somehow, is exactly the message the world needed and, in my view, continues to need.