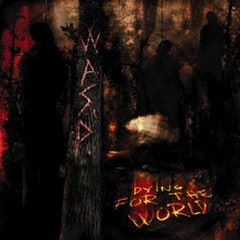 Review:
2002 saw the release of W.A.S.P.‘s 10th studio album Dying For The World. Though this CD is from one of the best bands in the world, it’s not an album for the fair-hearted to listen to. Dying For The World is angry, both in lyrical content and sound, and this was during the middle of frontman Blackie Lawless‘ whole reinvention of the concept album period.

Dying For The World was written under Blackie‘s anger towards the events of 911 and the attack on the twin towers in New York — this alone makes it a sensitive album in the eyes of a lot of people. Along with this, he has a go at the plight of Native American Indians and a final parting shot at the Catholic Church (fuelled by his attack on religion that was the theme of 2001’s Unholy Terror).

The next thing to remember is that although the lyrics don’t mention anything specifically, the liner notes inside give a far more insightful look at the intent of the album and leaves no doubt about the meaning throughout. Read the liner notes — ‘fuck political correctness; that went down with the World Trade Center’ — that should tell you everything you need to know.

“Shadow Man”, “Hell For Eternity”, “Revengeance” and “Stone Cold Killers” all deal with the topic of terrorism in the name of religion. The message here is quite simply that you will pay for what you have done, and is directed at the perpetrators of the atrocity. Likewise “Hallowed Ground” was inspired by a visit to Ground Zero and is a sad, somber, and ultimately moving song that pays tribute to the people of that day. “Trail Of Tears” deals with the oppression of Native American Indians — it’s a haunting and moving number, and very much like the other work that Blackie displays on this album, is heartfelt and at times difficult to listen to.

The other numbers are “My Wicked Heart”, which sounds like a usual W.A.S.P. number but with serious angry overtones with thoughts of bitterness and revenge, and an acoustic version of “Hallowed Ground”.

For me the most disturbing part of Dying For The World is the dark and atmospheric “Black Bone Torso”, which deals with child abuse within the Catholic Church. This song ultimately leaves your skin crawling.

Musically, Dying For The World is just about there — but knowing what the album is about, and listening to it again, changed my whole perspective on it. It’s a sad and angry album that makes you think a little bit more about things, and after all, there is nothing wrong with that, right Blackie? ‘One, two, fuck you…’ you have been warned.