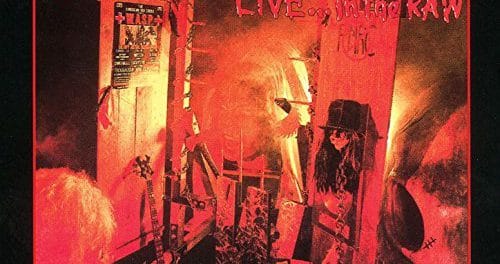 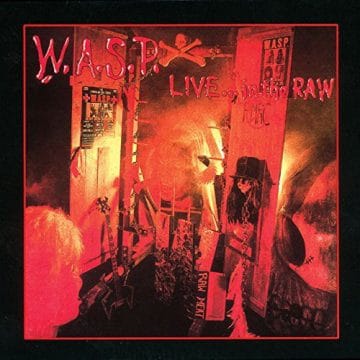 Review:
“One of the reasons why Chris [Holmes] and I hooked up is that we were such extreme personalities. We had the ability to be
the nicest people you’d ever want to meet, but cross us and we could turn into the devil himself.”
~Blackie Lawless

In the mid-’80s, there were plenty of narrow-minded people that thought Blackie Lawless was the devil and perhaps with good reason. Like many rock fans, I myself was first introduced to W.A.S.P. with the release of controversial debut single “Animal (Fuck Like A Beast)” and immediately scoured local record stores and music magazines for the debut album. While the provocative nature of the lyrics surely peaked my interest, the hard rock musician in me was fully taken in by Blackie Lawless’ ability to mix powerfully aggressive music with catchy overtones and lyrics that were thought provoking and beyond the generic lyrics of many up and coming hard rock bands at the time. Yeah, you can’t always say that Blackie’s music is filled with much in the substance department but there’s no denying his ability to form an interesting sentence. In hard rock, that can be a rare quality which is probably a large reason why W.A.S.P. still tour to a loyal fanbase over three decades later, which is probably more than can be said for half of those narrow-minded folks that tried to crucify W.A.S.P. all those years ago.

As a kid in high school, digging such an unpopular music genre as hard rock was in the early part of the ’80s, songs that got under people’s skin as well as anthems like “I Wanna Be Somebody” became inspirational fight song material in the war against those forces looking to hold down metalheads like myself. Yeah, maybe it sounds ridiculous saying that now but as a rock and roll youth of the early ’80s, every day seemed like another chance to stand up for this cause, that through the playing of every record seemingly caused the blood to flow faster, the heart to beat harder, and the head to bang more defiantly. As a kid who had already survived battles in the rock trenches as a late ’70s fan of bands like KISS, Angel and Cheap Trick, W.A.S.P. was a dream come true — a band that I could not only throw in the face of the popular kids like I had done for years already, but one that was more disgusting, nasty, and brutal than any I had launched on the opposition before.

This came into play in 1984 when W.A.S.P. rode into town opening up for Quiet Riot who, for all intents and purposes, had already started to fade out due to the mouth of frontman Kevin DuBrow. Surrounded by a sea of clueless well-off teenagers present more for the sole purpose of being seen than to actually support Quiet Riot or W.A.S.P., I watched as jaws dropped at the sight of Blackie Lawless taking the stage, complete with codpiece and evil smirk. There are few things more gratifying to a headbanging teenager than screaming out the words to a song in concert while a ton of perplexed faces look on. But what does all of this have to do with the album Live…In the Raw which was still a couple years away from being unleashed? Well stick with me, I’m heading that way.

Up until 1984, my musical resume consisted of very short stints fronting some pretty lame bands and with good reason — my own contributions which consisted of lyrics that more aped what I heard on records than what I actually had a clue about weren’t even remotely anything to write home about. With the arrival of W.A.S.P. (and oddly enough Bruce Springsteen), I found that it was possible to take even the most simple of everyday moments and turn them into something bigger. Heck, it wasn’t until years later that I actually realized that despite what Springsteen wrote, New Jersey really wasn’t all that and from W.A.S.P., I discovered that just about anything true that happens in life can be turned into ingredients for choice cuts. When W.A.S.P. released their first live album in 1987, I realized just much of an impact Blackie and W.A.S.P. had on my growing rock and roll education.

Coming hot on the heels of the band’s first three kickass releases, Live…In the Raw is a brutal bookend to the very controversial first part of the W.A.S.P. catalog. While Blackie would continue to push the envelope going forward, In the Raw stands as the last true moment in the band’s history where Lawless would be over-the-top just for the shock of it. Starting with 1989’s The Headless Children, Lawless incorporated themes and concepts reflecting segments of society including musical commentaries on politics, world affairs, and even personal struggle. But in 1987, it was still all about pushing the buttons of conventional society while not just trying to ruffle, but tear off, the feathers of the PMRC most particularly with the song “Harder, Faster”, a supposed ode to Blackie’s beloved Washington Wives. That moment when I read in a metal magazine that Blackie had said something to the affect that if the PMRC thinks that they have heard the worst, just wait until they hear “Harder, Faster.” I immediately (and perhaps much too boldly) proclaimed to my bandmates “well wait until Blackie hears “Take the Snake!”, a musical retelling of a lakeside encounter that I had experienced and turned into metal lore. At that moment, I knew that through the music of W.A.S.P., I had gained the insight to take what was more than likely an awkward sexual situation in the woods and make it sound like a delightfully, dirty Gene Simmons tall tale. But at the end of the day, Blackie Lawless rests high upon a career of music that stands the test of time while my little ditty inspired by Blackie, well merely stands as a forgotten piece of music to a moment probably even forgotten by the gal I was with, nevermind the “wait until Blackie hears…” comment.

Featuring some of the best bits from the band to that point including “L.O.V.E. Machine”, “I Wanna Be Somebody”, and dark ballad “Sleeping (In the Fire)” from their self-titled debut; “Wild Child” and “Blind in Texas” from follow-up The Last Command; and “9.5.-N.A.S.T.Y.”, “I Don’t Need No Doctor”, and the title track from 1986 release Inside the Electric Circus, this first of the band’s live releases is as the title states — raw. But in an era where most hard rock bands followed up several first studio releases with a live album featuring one or two forgettable new studio tracks, W.A.S.P. sharpened their saw blades and came out slicing injecting the live set of In the Raw with brutal new tracks “Manimal” and “Harder, Faster.” Both tracks stay true to the raw, dirty, sound fans had come to love from Blackie and company and to this day, “Harder, Faster” is still a track I love to crank when charging down a long stretch of highway. Even studio track “Scream Until You Like It” — while not the most riveting and imaginative of W.A.S.P. songs, is a fun listen despite being pretty typical of movie soundtrack rock songs of the era (the song was originally recorded for the movie Ghoulies II) complete with familiar riff and chant chorus lyrics. After a trio of albums filled with high energy anthems tailor made for arena rock and roll gatherings, W.A.S.P. toss in the missing audience ingredient to create the seductively sticky mess — that is Live…In The Raw.

For myself (and I’m sure for many others), the first of W.A.S.P.’s live offerings still stands as a reminder of when life was filled with younger, louder and while maybe we didn’t realize it at the time, simpler, moments. Rock and roll was loaded with music that was not only exciting to young people due to language and some of the filthy pictures painted, but also because even for the most isolated, it instilled a belief that we were not alone in the world. Much like the kids who were uplifted by David Bowie’s unique take on things in the early ’70s and those who found a voice in the American and English punk scenes later in the decade, bands like W.A.S.P. provided a musical middle finger for ’80s hard rock youth to wave in the face of happy go lucky over privileged mall prowling snobs. This music, described as disposable by some, provided a gathering point for many looking for their place and in many cases, lifelong friendships around the world. At the end of the day, we all just “wanna be somebody.”

Some of us just like it a little “harder, faster.”

awesome track for the movie ghoulies 2

Official video W.A.S.P. from the album “Live … In the Raw”