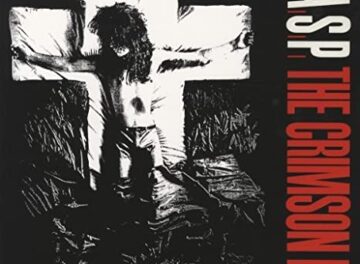 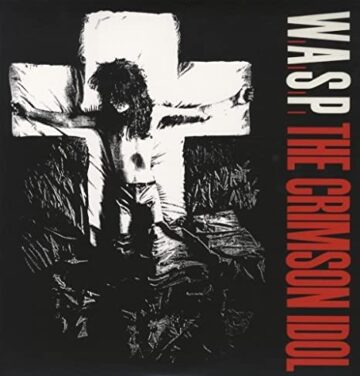 Review:
The band W.A.S.P. has always intrigued me, starting in my high school days when an upperclassman who played bass wore some of their shirts when I would see him around my hometown of Columbiana, Ohio. Years later in college, I was collecting Metal Edge magazines and started reading more about Blackie Lawless and his band. Of course, us fans of the 1980s remember the W.A.S.P. being mentioned with the P.M.R.C. hearings along with the Chris Holmes scene in The Decline of Western Civilization Part II: The Metal Years. My hard rock / metal preference was more of the glam, radio-friendly style, so W.A.S.P. was something too heavy at the time for me, and it seemed to me Blackie‘s image was more of a rip off between Alice Cooper and Gene Simmons, who were my favorites when it came to a theater image. It wasn’t until a few years ago when I decided to listen to W.A.S.P.‘s Golgotha album, and enjoyed it (even ranking it as one of the best of the year).

The Crimson Idol is a concept album about a boy named Jonathan who, after being abused and ignored by his father, dreams of playing guitar in the rock world after the death of his brother due to a drunk driver. He sells his soul to become rich and famous, which leads him to a world of sleazy managers, drugs, and fame as he tries to escape the scars of his past. “The Titanic Overture” starts with an acoustic / mellow beginning until the guitars and drums help build the song. The style welcomes the audience to the story, almost like a Broadway format, with only two verses but a lot of instrumental. The style is almost similar to something The Who created with Tommy, although more intense throughout, including the double bass drumming and fills that Keith Moon would have appreciated. Since the liner notes mention Frankie Banali and Stet Howland as the drummers, but not listed who played on what, the vagueness of who played what is used in this review (along with which songs Lawless and Bob Kulick play on guitar). The drumming is solid and intense throughout the album, and one can see here that Banali was a competent musician regardless of what many experts have said about Quiet Riot in the past on the songs he played here.

“The Invisible Boy” takes more to a Rush / The Who structure in the music and has a great guitar solo. Lyrically using the mirror as a personification character in the story, talking back to Jonathan, gives the literary aspect to the songwriting. This isn’t a Snow White witch asking who is the fairest of them all, but a boy trying to be seen in a world where others ignore and even abuse him. Doug Aldrich was rumored to play on “Arena of Pleasure” (without credit) and has a more heavy flavour to it, which is what I first remember hearing from W.A.S.P. from seeing the band on MTV. The ending leads right into the next track about Jonathan meeting Chainsaw Charlie, a businessman who wants to sign him to a record deal after Jonathan has been playing at the arena, paying his dues.

“Chainsaw Charlie (Murders In The New Morgue)” is one of the song titles I remember when mentioning W.A.S.P., besides their early work. There is a spoken lead in connecting the last song to this one, similar to some of the Alice Cooper concept albums, and once the chainsaw is heard, I immediately go back to when wrestler Terry Funk was in the WWE in the mid-1990s as Mick Foley‘s partner using the same name.  The song kicks into the Faust-like story of someone offering Jonathan his chance of all the desires of his heart. Again, more intense drumming helps the intensity of the story and the driving guitars like a train is coming down the tracks. “The Gypsy Meets The Boy” is a nice break from the heavy style of the tale, where Jonathan meets a lady who tells his future. Lawless sings nicely here, as opposed to the angry screaming vocals that the rocking songs entail. It is here, and the ballads that show that Blackie isn’t all gimmick and has the vocal skills that get overlooked at times in the metal world.

The songs “Doctor Rockter,” “I Am One,” and “The Idol” continues the tale of Jonathan rising to fame, fortune, and becoming a worldwide rock star, with people coming into his life offering him drugs and clinging on to him to use him, who is now the famous Jonathan Steel, The Crimson Idol. “I Am One” adds some strong language in it, which throws back to the P.M.R.C. days for Blackie, along with his “I don’t care” view in telling people how the music industry is run. I am not sure this song, and a few others, could get recorded today for political reasons, but that’s a personal opinion.

This album is hard to find a single to be taken off of it that works, but if there was one, “Hold On To My Heart” would be the one I would have chosen. Unlike many acts who have done concept albums, like Rush, Styx, and Cooper who have been able to have some success with a single being released from their albums, The Crimson Idol doesn’t fit in that genre without hearing the whole thing to truly appreciate what’s going on here. But “Hold On To My Heart” does fit the format of a radio-friendly song, with an acoustic beginning turning to the power ballad once it continues, similar to an Eddie And The Cruisers Jersey-sounding format. This is also my favorite track on the album, and if you played it for some, they may not realize the vocals is the Blackie that people may think of when his name comes up. This is a hidden gem for me. “The Great Misconceptions of Me” ties the rest of the story, where Jonathan realizes his price for all the fame and situations to the point which shows the end of the character. The character finds that all of his dreams and goals were achieved, but at what costs since there still was no fulfillment?

Even though this has the W.A.S.P. band name to it, The Crimson Idol was considered solo work for Lawless, and although it is not Tommy, The Wall, or Welcome To My Nightmare, there are wonderful moments here. Again, one has to experience the whole album in the sitting to appreciate the musicianship here of Lawless, guitarist Bob Kulick, and drummers Banali and Howland. Reading the lyrics while listening to the score also helps, which adds many literary devices here that Blackie doesn’t get his credit for (I can appreciate it having a B.A. in English and being a former teacher). The rock star version of Faust has been used many times in the past, and this story would be great in a novel format. The solid drumming helps my enjoyment of the release. With my limited experience with W.A.S.P., especially for someone who is not normally a fan of concept or rock opera albums, this is a great mix of storytelling, musicianship, and artistic achievement that should get more notice as a great metal record.