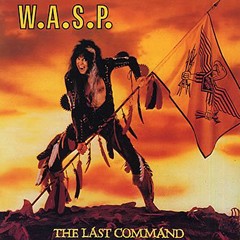 Review:
In 1985, ‘wild child’ Blackie Lawless and company released one of the strongest albums in W.A.S.P.‘s vast catalog — The Last Command. Essentially written while on tour supporting their outrageous debut, The Last Command was a middle-finger salute to the newly formed PMRC — a political group who were targeting offensive artists — and W.A.S.P. was in their cross-hairs. On this release Steve Riley had replaced Tony Richards on drums because he was deemed ‘too unreliable’ for the band to deal with, and it ended up being the last to include rhythm guitarist Randy Piper.

“Wild Child”, originally offered to Motley Crue, kicks this CD off with a rip-roaring chorus — something that Blackie Lawless has always had a knack for writing. “Ballcrusher” tells the story of a bisexual ‘black magic voodoo queen’, and contains the immortal line, “I said AC, she said DC, the damn bitch is just too bizarre!” Speaking of AC/DC, the album’s next track “Fistful Of Diamonds” is kind of like the Aussie‘s “Ain’t No Fun (Waiting Round To Be A Millionaire)”, in the way it expresses the band’s longing and desire for ‘the root of all evil’.

“Jack Action” has yet another chorus that is sure to stick in your head, and is a typical W.A.S.P. sex song. “Widowmaker” on the other hand starts off with a creepy guitar intro courtesy of Chris Holmes and then launches into a climatic ‘turn it up to 11’ riff that could very well kill your wife. “Blind In Texas” is one of W.A.S.P.‘s best known songs and tells the true story of a night out on the town in the old American south. “Cries In The Night” and “Running Wild In The Streets” could probably be considered as filler, but nonetheless they both display some fine guitar work. The epic title track is surprisingly melodic but still manages to pack a punch while “Sex Drive” closes the album with the line, “tell me that don’t hit the spot!” To answer this question… yes, it does.

W.A.S.P.‘s music could be seen as fast food for the ears — you just can’t get enough of it. Now go buy The Last Command (if you haven’t already) and take a bite.