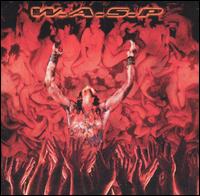 Reviewed by James:
The problem with music today is there is no brain, heart, or soul put into it. One of 2005’s biggest hits was a song by a white guy in pants that don’t fit and in more cheap jewelry than a Nevada call-girl “singing” in an angry spoken word about “sitting sideways.” I suppose each generation is entitled to relate to whatever music they so choose but it is my God given right to point out the idiocy of my surroundings no matter if it hurts the simple minded or not.

That said, if you have read some of the reviews of the W.A.S.P. Neon God set, you probably have seen a lot of really confused 30-something-year-old women less than satisfied that this album is not about what Blackie Lawless is like in bed. While the sleaze of W.A.S.P.‘s early recordings is what got me into the band, the integrity of their new work is what keeps me a fan. I cannot help that some people have narrow-mindedly typecast the band into a small creative box and will not allow that band to grow out of that box or at least mature and release something different. But I’m sure both myself and the band themselves can rest assured that if Blackie would have given these women what they say they wanted and sung songs about his testicles, those same people would’ve bitched, moaned, and complained that the band is “trying to relive their glory days.” In other words, don’t believe what you read from those who simply will not be satisfied because they are
battling their own borderline mid-life crisis and don’t appreciate, like, or accept anything new including new releases by great bands that have a history behind them.

Now that I’ve ranted on the narrow minded and flat out idiotic reviews that lowered my IQ by at least a dozen points, let me put the album under the microscope with the concept that W.A.S.P. is a metal band and not just a metal band that sings about sex acts. After all, we didn’t pan Elvis‘ post “Hound Dog” releases because it had nothing to do with the k-nine species so why should we pan W.A.S.P.‘s work because it is a little bit more complex than “Animal”?

This story is quite complex. Incase you’ve not read it on the reviews – the ones that actually understand the story, that is – the story is one that could pass as a Stephen King novel, only W.A.S.P. didn’t get tired and actually put an ending worth sticking around for which is rarely the case for any Stephen King release. The story is of a boy named Jessie who is abused and orphaned. Over time, he discovers his ability to read minds. This ability earns him a following as these people look up to him as some sort of dark Messiah. The story progresses over time with the first Neon God release being titled The Rise and part 2 is described as The Demise. So naturally you can tell from the titles what each disc is about and how it tells the story.

The story takes many twists and turns throughout and those are reflected in the tone and sound of the album. Speaking of the sound of the album, I first want to compliment the producers for making this record sound really good. For concept albums, production must be high otherwise something gets lost in translation. This is a relatively crisp and clear sounding recording and that assists to the impact of the disc. Second, the musicianship is fantastic.

Someone who reviewed this album and put it down actually complimented the musicianship on a Green Day record. With all due respect to Green Day, as they are not the worst band of all time though not something I’d consider myself a fan of, they aren’t a pimple on Blackie Lawless‘ ass when it comes to talent. Blackie surrounds himself with the best musicians available and damn does it shine through in every album and every concert. Green Day? Well, it’s good to know an anti-American and anti-Western civilization group of drunks that know two guitar strings can get air play these days. They’re the best of the worst, but complimenting them and mocking or putting down W.A.S.P. is like saying “Those Indianapolis Colts are pretty damn good. But, my pee-wee junior-high football team went undefeated. So, we’re better!” Get a clue, M’kay?

First, it’s not quite as melodic as many W.A.S.P. fans might expect. Don’t get me wrong, it’s melodic pop metal and you will find yourself singing along to certain songs. But many songs could not stand on their own upon first listen because you either wouldn’t understand it due to the concept or it doesn’t sound good without hearing the song before it.

In addition, there are a few short songs that are best described as intro and outros. Perhaps ‘filler’ could be a term that can be used, but in a concept sometimes a transition needs to be made and that is the purpose of such tracks.

And finally, some of the tracks can run together. This also is common for concepts but I do not like when it happens. Call me old fashioned but I like to know when a song begins and ends.

And now, the good.

First, the story is very cool. I love debating people who tell me my chosen style of music is not about anything when they like the most mindless of mindless drivel. Now all I have to do is whip out the booklet that comes with this CD with the story on it and say, “About nothing, huh?”

Second, but second to none, are Blackie Lawless‘ vocals. I am always shocked that guys like Kevin DuBrow and Blackie Lawless can be screamers for so many years and still sound the same while Steven Tyler sings in a far less rough style on his voice and even his spoken voice sounds like he’s had 6 to 10 throat cancer operations at this point.

Third, great songs, but one really stands out. I said above that not all the songs can be played on the radio and be accepted or taken well without knowing the story. This is true of most of the tracks but not of “Asylum #9.” I played that track on the radio all of once and one person wrote me saying it was, as he put it, “the best song I’ve heard in 5 years.” But hey, we can’t play that song on the radio because the ever so talented Green Day wrote an ever so meaningful song calling us all idiots. Naturally that will get lots of play and we’ll eat it, but W.A.S.P. and true talented rock bands get ignored in an attempt to keep the myth of Cobain‘s greatness alive… Sorry, got lost in a rant yet again. “Asylum #9” is just a great song. I have cranked that one up REALLY loud and screamed at the top of my lungs trying to do my best Blackie Lawless impression on many occasions. Blackie sounds great, there’s a mind blowing solo, and the band just shines on this
cut. I’d like to see them perform this song live, though the few times I’ve seen them since this release they have not.

And finally, why don’t I just give the band credit for staying metal when it seems to be “cool” to sell out your past and look like your father sitting next to you as he takes you to your drivers test and pumps his fist to your music like pathetic Joe Elliot does and Aerosmith did when they sold their soul for a mediocre last run by dancing with N’sync and Britney Spears. Simply put, Blackie understands that W.A.S.P. is a heavy metal band that performs heavy metal. Regardless, the lyrics being groin driven or brain driven, the sound is loud and there is no apologies made for not being trendy, hip, or cool. After all, you see, that describes the typical metal head, doesn’t it? A little dark, a little weird, a little crazy, but a whole lot of fun? If not, I’m in the wrong genre!

So, overall, is this album worth buying? I’d say yes but only if you have an IQ greater than your amount of teeth and aren’t an arrogant person who will not accept the maturity of a band. In other words, if you’re going to be pissed that you won’t hear a generic rip off of “Animal” on this album, keep your money and buy one of W.A.S.P.‘s great live CD’s or DVD’s. But if you want a kick in the teeth with something fresh, new, different, yet still kick ass metal, buy it! You’ll enjoy the story, most of the songs, and you’ll get to hear one of metal’s unsung heroes, Blackie Lawless, belt out songs with as strong of a voice as ever before!

Reviewed by Skid:
My favorite W.A.S.P. album is the conceptual Crimson Idol, so I was excited to hear that mastermind Blackie Lawless was once again working on a concept album. This time Blackie focuses his story around a boy named Jesse Slane, who is abandoned at a young age by his junkie mother. The Rise is part one of a two part series (part two is scheduled to surface later this year) that focuses on Jesse’s alienation, orphanage abuse, suicide attempts and his burning question of “why am I here?” In his quest to find the answer, he uses his newfound powers to become a cult hero – believing that he is a Messiah for misguided souls.

Even though the songs inter-mingle to form a cohesive story, there are a few tracks that stand out. “Sister Sadie”, a song about a young boy pleading with his abuser, is over seven minutes of turbo-charged rock that has Blackie emotionally delivering lyrics such as “I’m fucked for life, I’m the child nobody sees”. “Asylum #9” has a great chorus and takes several twists and turns throughout, arguably the best tune on the disc. “What I’ll Never Find” borders on being a ballad, similar to “Hold On To My Heart” with a bit more muscle. W.A.S.P. goes into overdrive on “X.T.C. Riders” and “The Running Man”; both are aggressive rockers that don’t let up.

I honestly didn’t think Blackie had another album like this inside himself – The Neon God may not surpass The Crimson Idol, but it is definitely an equal and ranks as some of W.A.S.P.‘s finest material. The album is served better by being played in it’s entirety and thus keeping the story in tact. I liked the idea of these guys doing another concept album, but even this exceeded my expectations. You can rest assured that I will be keeping an eye on W.A.S.P. Nation to see when Part 2 drops. W.A.S.P. has returned with a vengeance!