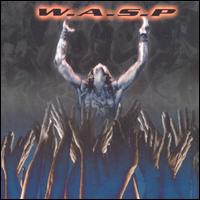 Review:
First things first, if you are unaware that this is a sequel to W.A.S.P.‘s The Neon God Part 1: The Rise, I strongly suggest you pick that one up before picking this one up as you might be a little bit lost in terms of the story.

The Neon God series by W.A.S.P. is about a boy named Jessie who is abused and orphaned by his mother. The boy eventually discovers a talent to read minds, and as a result of that talent, he gathers an almost religious following who view him as a holy creature – a dark messiah. He is The Neon God.

In this record, you find out the fate of Jessie and what his power will ultimately bring him to. Since part one was titled The Rise and part two is titled The Demise, you can pretty much determine what each disc is about story wise.

There are differences between part one and part two. While part one was very story driven and only a handful of songs stand out as exceptionally catchy or radio friendly, part two is entirely comprised of catchy metal songs that could be considered anthems at times. For example, track one off Part 2 is titled “Never Say Die” and is very catchy and very easy to get caught by. And, Blackie Lawless delivers some really interesting and different screams than we’re used to hearing from him. In fact, a few times towards the end of the song one might wonder if the high pitched sound is the sound of a guitar or Blackie screaming at the top of his lungs. It’s really high energy rock ‘n’ roll. I love it!

The final track of the opus is called “The Last Redemption” and it is nearly 14 minutes in length! This song is an epic culminating the story of Jessie with flashbacks to songs off of Part 1 thrown in to make the effect that much stronger. During this marathon, Jessie battles Judah in a verbal confrontation about the so called “God of Love.” It’s quite deep and powerful yet melodic and musically strong.

I fully enjoyed both albums. To be fair, I’m not sure playing these albums in a car with those unsuspecting of this opus of a concept album might confuse the hell out of them. But if you tell them the story to catch them up, I’m sure they will appreciate the musicianship applied to these songs and the wonderful lyrics that help tell this great story.

Is this a “power metal” set as many concept albums are? The answer, quite frankly, is no. While power metal concepts can be very cool, W.A.S.P. accomplishes the story telling in a far more straight forward and take no prisoners style. Simply put, its great music by W.A.S.P. as heard on their earlier albums with more intelligence put forward by the band than sex references. I dig both styles and simply put, I dig W.A.S.P. and these records. Pick ’em up!