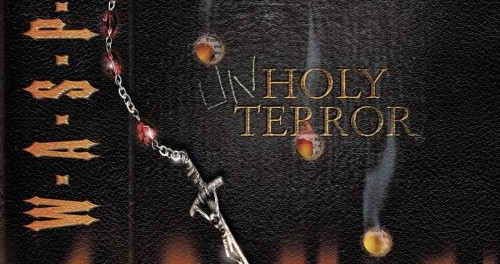 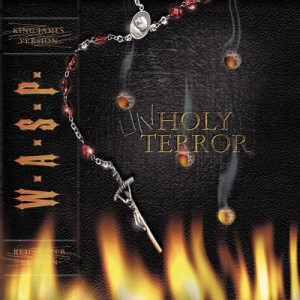 Review:
Yesterday marked the 15th year anniversary of the release of W.A.S.P.‘s Unholy Terror. I must confess that my interest in what W.A.S.P. were doing waned after their awful Kill Fuck Die album released in 1997. I did obtain the shock rock group’s very solid Double Live Assassins album in 1998 but after that, W.A.S.P. were out of my sight, out of my mind (except for their phenomenal prior records).

Nevertheless, around seven years later, I looked back to see what W.A.S.P. had been up to and ended up purchasing all of their studio albums from 1999 onwards. Two albums that I listened to a few times before putting them aside were 2001’s Unholy Terror and 2002’s Dying For The World. Accordingly, my memories of both more than ten years later was rather dim and I was actually mentally prepared to write a negative review for Unholy Terror. Upon revisiting Unholy Terror for the purpose of this review, my thoughts for about it for the last ten years were admittedly just so wrong. Unholy Terror is actually a very solid album that surprisingly fits well alongside the classics The Headless Children and Crimson Idol. As is often the case, W.A.S.P. change their sound somewhat from album to album and this was also the case with Unholy Terror which is a heavier album than the more sleaze infused Helldorado released in 1999.

Every song is a good one on Unholy Terror except for the dismal “Euphoria” which is a slow almost classical piece that fits quite awkwardly with the rest of the songs on the album and somewhat kills the momentum of the album. Highlights include the self-explanatory “Let It Roar” and the powerful “Charisma” and “Who Slayed Baby Jane.” Sure, it’s hard to make out exactly what frontman Blackie Lawless is exactly singing but that’s what a lyric book is for. Of note, the CD booklet for my “King James version” of the album is quite nice opening up like a book. The one downer with the CD booklet is the last two pages filled with merchandise advertisements including t-shirts, various sports jerseys, signed guitars and even a W.A.S.P. gold record from W.A.S.P. Nation. Maybe it’s just me but putting in ads to sell merchandise in CD booklets is going one step too far in the land of commercialism in my eyes.

Overall, Unholy Terror is a very solid album that likely did not get its just due to its timing and perhaps rather heavy lyrics. It’s too bad that album did not follow right after The Headless Children and The Crimson Idol because it would have been a logical continuation to those two albums. In any case, I am glad that I revisited W.A.S.P.‘s Unholy Terror album because it would have been a shame to go any longer “thinking” that it is a weak album. If anything, it is just another example of just how good that W.A.S.P.‘s discography has been over the course of the band’s career and how some of the shock rock’s albums are still looked upon in high regard despite W.A.S.P. not selling as many albums as the bigger and more popular ’80s era hard rock and heavy metal groups.