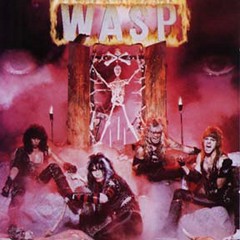 Review:
Originally released in 1984, W.A.S.P.‘s self-titled debut stood out from all the other hard rock acts of the day, both sonically and theatrically. Led by tenacious frontman Blackie Lawless, W.A.S.P. emerged from the LA glam scene victorious, despite allegations of perversity and such by the P.M.R.C. Why? The answer can be found on this album.

Among the pioneers of the shock rock genre (and heavy metal in general), W.A.S.P. was the voice of every teenager’s angst and hostility, a perfect example being the opening track “I Wanna Be Somebody”. The song starts off with Tony Richards pounding on the drums, leading to a thrashy guitar riff by maniac Chris Holmes (made infamous by his pool interview in The Decline Of Western Civilization II: The Metal Years). “I Wanna Be Somebody” is essentially an anthem that rocks like no other anthem should. “B.A.D.”, “Scholl Daze” and “Hellion” are somewhat similar to “I Wanna Be Somebody” in the fact that they all bluntly address the awkwardness of adolescence, unlike the fan-favorite “L.O.V.E Machine”, the title of which is just a metaphor for what lies beneath Blackie Lawless‘ codpiece.

As a whole W.A.S.P. does get a bit repetitive, but who cares when the songs are this good?