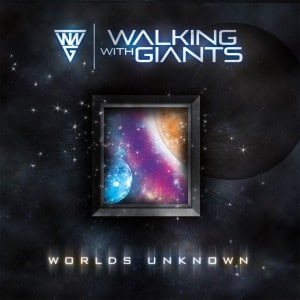 Review:
Imagine that you are a musician, but having a difficult time finding the right talent to create the music that you love. What would you do in that position? Would you reach out to two of your favorite bands and see if you could recruit some of them to help you create the music of your dreams? Songwriter, singer, and guitarist Gary Noon did just that for his project called Walking With Giants. He recruited Clint Lowery and Morgan Rose from Sevendust and Brian Marshall from Creed and Alter Bridge. Originally, Noon wanted to start off as a cover band performing songs from Sevendust, Alter Bridge, and Creed – however, he ran into a dead-end when he was unable to find band members that would be willing to commit full-time. He then sent some songs he wrote to Lowery, who he had become friends with a few years back – and Lowery loved what he heard and told him he should be releasing this music to the public.

January 15, 2016 saw the release of their debut album, Worlds Unknown. This album does have traces of Sevendust and Alter Bridge, but it is still a monster on its own. With only a couple of songs that sounds like they could have come from a Sevendust album (“Heavy Hand” and “The Now”), the rest of the album is filled with heavy riffs, hooks, and melody (with the exception of the intro “Worlds Unknown Part 1” and outro “Worlds Unknown Part 2” – piano based tracks). Anyone familiar with Rose’s unique drum style, can definitely tell he is the one behind the kit. Rose is one of my favorite drummers and I love watching him perform live because he has so much energy and involves the crowd in every show.

Noon’s vocals compliment the music very well. If I had to compare Noon’s vocals, I would say there are times he sounds very similar to Aaron Lewis of Stained. Noon has the clean vocal delivery throughout the whole album, with no heavy screaming to be found that one might hear from Lewis or Lajon Witherspoon of Sevendust. Noon’s lyrical inspiration touches on many life struggles that one may deal with on a daily basis. “Heavy Hands” touches on ones fight to find out who you truly are and who you want to be. The other songs deal with all the negativity from social media and television. Noon is such a positive person and wants to fill his lyrics with inspiration and positive thoughts.

Walking With Giants are not creating anything we have not heard before, but the music they have created is defiantly something to listen too! Worlds Unknown has a total of 11 tracks and 9 of them are hard hitting and catchy songs. “Guilty One” has an amazing layered guitar solo that shows the talents of Noon and Lowery. Some other songs that have killer guitar solos include: “Different Voice,” “Heavy Hand,” “Back To Life,” and “Endless Road.” They may not be long drawn out guitar solos, but they do complete each song.

Noon is hoping to take his music out on the road, but he will have to find other musicians to help him with that dream. Lowery and Rose are out on tour with Sevendust while Marshall is busy writing another album for Alter Bridge. I am sure he will have no problem finding the right group of people to help him create this great music in a live setting. Just hope they will make a stop in Minnesota [USA] so I can witness it myself.