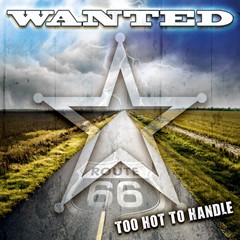 Review:
From the crowded halls of forgotten and overlooked hair metal bands comes Wanted — an Indianapolis group who are yet another of those ‘close–yet so far’ bands from the hair metal explosion of the late ’80s. With the typical looks for the time, Wanted blended up the sounds of Motley Crue, Skid Row, Tora Tora and manager-mates Sweet F.A. and ended up catching the attention of Geffen Records. However that relationship quickly went sour after recording a mere two songs and ever since Wanted has been relegated to collecting dust.

Albums like Too Hot To Handle are always difficult to review, because even though all the pieces were in place for success, twenty years (and thousands of bands) after the fact things get a bit stale — Wanted is no exception. With that being said, the band play some convincing ’80s hard rock on “Whiskey & Women”, rumble right along during the excellent title track, and drive it all home on “Mr. Right”. But even as strong as these songs are the ‘wow’ factor has expired years ago and the lack of originality is their downfall.

“Lost In Me Forever” and “Be Still My Heart” found the band recording in Hollywood for Geffen… and while “Be Still My Heart” continues with the Motley Crue vibe “Lost In Me Forever” is your typical half-assed ballad. Rounding out this stroll down memory lane is a live recording from 1990 — of course the sound quality is lacking but the gig shows how Wanted could energize a local crowd as they storm through “Anchors Aweigh”, the melodic “See It Through” and the interestingly titled “Sidewalk Seducer”.

You know exactly what you’re getting with Too Hot To Handle — ’80s era hair metal, nothing more and nothing less. And if you long for the days of permed hair, cowboy boots and party music, why not take a chance on Wanted?