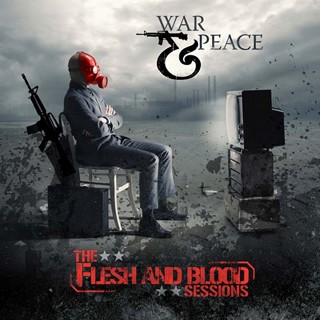 Review:
Anyone who is a fan of ’80s hard rock is familiar with the name Jeff Pilson, who is best known for his tenures in Dokken, Dio and presently in the revamped Foreigner. As many know, Pilson is a very capable vocalist, stellar songwriter and musician.

In the late ’80s, after Dokken had disbanded, Pilson concentrated on other projects, among them Flesh And Blood, a contemporary rock act with huge driving riffs and infectious melodies. Pilson handled lead vocals, rhythm guitar and keyboards and enlisted the services of Legs Diamond bassist Michael Diamond, guitarist Randy Hansen and drummer Vinny Appice (no introduction needed). Together they recorded some tunes with the help of friends and studio magicians — engineer Angel Arcuri and Neil Kernon, who stepped in to mix the original recordings.

Flesh And Blood went on to lose the rights to their name and changed their moniker to War & Peace — perhaps that was too ambitious? In any event, by the time the band changed their name there was a shift in the line-up, the chemistry of the band was thrown off balance and things slowly began to unravel. The change in the musical climate and the general public frowning on musicians that came out of the ’80s ‘hair band’ era certainly didn’t help matters.

In this re-release of the Flesh And Blood recordings, titled The Flesh And Blood Sessions, Pilson revisits the songs and brought in some additional content such as the bonus track “Heaven Knows”. The former Dokken bassist also wrote the liner notes for this collection, and in them he walks you through the history of the band. All in all War & Peace wasn’t groundbreaking, but the music has a lot of heart and soul to it. It’s a shame that the prejudice against these musicians didn’t allow this band to blossom. Tracks like “Kill For The Love Of God” and “Nailed To The Cross” showcased just how cutting edge War & Peace was musically and lyrically. If you’re a no-frills hard rock or contemporary metal fan you’ll appreciate what The Flesh And Blood Sessions has to offer.