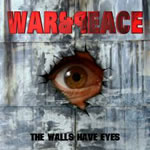 Review:
This release from War & Peace is essentially a Jeff Pilson solo album. Musically the album is fairly dark and contemporary, while vocally Pilson comes across like a soulful Jani Lane as he tackles several serious issues in the lyrics. Having worked in both Dokken and Dio, Pilson has managed to blend the pop-sensibilities of the former with the classic metal sound of the later, resulting in some powerful music.

Imagine the majestic leanings of a band such as Blue Murder being dragged into the 21st century and you can get a feel for The Walls Have Eyes. “Stranger In My Own Land” is the logical choice for radio; it has an incredibly catchy chorus and chugging verses leading up to it. A killer 70s sounding guitar dominates the aggressive “Rock And Roll Breakdown” while “No One Is Listening” and “The Shell” wanders into the melodic territory of artists such as Ken Tamplin with their multi-layered vocals. “Black In The Mirror” has Pilson unleashing a heavily blues based guitar solo with outstanding results.

“Desperate Hearts” may just be the best song on this album. It is a slower number that really displays the power of Pilson‘s voice — not to mention his mastery of the passion laced guitar. The Walls Have Eyes ends with a touching string version of Dokken‘s “Walk Away”. All in all this is one enjoyable album as Jeff Pilson displays why he was such an integral part to his previous bands. Simply put, another classic release from Z Records and Jeff Pilson.