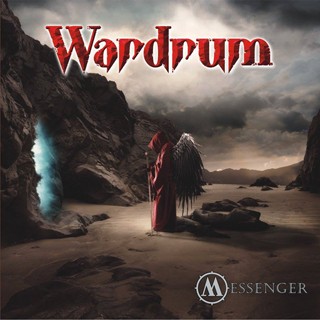 Review:
Wardrum, a band from Thessaloniki, Greece, is yet another amazing power-metal band from Europe. Their third and latest album, Messenger, is a juggernaut — there is no other way to describe it.

This is technical power metal at its best — from the opening track “Shelter” to the closing “Four Seasons”, you are treated to eargasam after eargasam. The guitar work is amazing throughout, as are the vocals and rhythm section. Kosta Vreto is one of the best all around guitarists I’ve heard in years — he is in the same class as Alex Skolnick and Al Pitrelli. He can play classical very well, and also listen to the extremely intricate rhythm during “Red Ruby Heart”. Singer Yannis Papadopoulos is better than most, because not many people can sing Judas Priest‘s Painkiller every bit as good as Tim ‘Ripper’ Owens did, and on this album his vocal harmonies are incredible, as is his voice.

The music on Messenger has the feel of classic power-metal bands of the ’80s, but there is something modern about it as well. I’ve heard lots of newer power-metal bands that are technical like this, but it doesn’t hit me other than the fact of being impressed by the talent. The music here hits me deeper than that, on a deeper level, and its fun to listen too. A sign of an intelligent songwriter is when a band takes on a historical character and makes an amazing song out of it — Iron Maiden is famous for doing this. Wardrum does this same thing during “Lady Jane Grey”, who was named successor to the King of England when he died. She was quickly removed, tried for treason, and ultimately executed. Wardrum does this song just as well as Iron Maiden, and even Iced Earth, do theirs.

Good luck trying to come up with a favorite song on Messenger. At first it was “Shelter”, then “Ruby Red Heart”, and then “After Forever”. I’m sure that as I wear this album out, my favorite track will change frequently — that’s the sign of a great album! Wardrum have not released a video from Messenger yet, but they have several from previous albums on their YouTube page. The band did however make a lyric video for the song “After Forever”, but I would hate to have to decide which song from the album will be the one they make a video for as I’m sure that would be a hard choice to make.

There isn’t a bad song on this album, and after listening to it several times I have had most of the songs pop into my head. Really, if you are into power-metal, it doesn’t get much better than Messenger. I knew there were some great bands coming out of Europe, but Wardrum stands alone as far as I am concerned. I give this one 5 of 5 stars — and in closing, did I mention that this album is amazing, kicks ass, and that you and all your friends need to buy it?