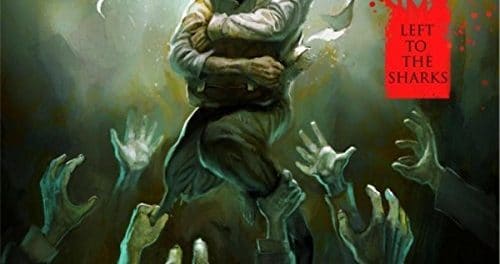 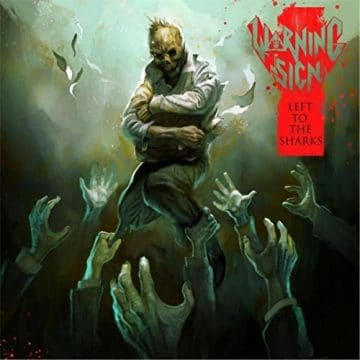 WARNING SIGN
LEFT TO THE SHARKS
Released on August 22, 2016 (Independent)

Review:
Merry Christmas fellow music fans. I haven’t received your gifts yet, however let me extend the gift of new music to you. No fanfare is required for this four piece metal band from Quebec City, Quebec, Canada as the music speaks — well, wails like a banshee for itself. Warning Sign are a bonafide metal band. That’s right, old school metal in the vein of many of your Bay Area and East Coast faves. I hear many many influences in the bands first full length LP Left To The Sharks — think early Metallica, Metal Church, Anthrax, Lizzy Borden, Exodus, Obsession and even Judas Priest and Iron Maiden. The band has also released an EP entitled Wake The Dead in 2013.

Vocalist Maxim Beaulieu throughout the album morphs between the likes of Mike Howe, David Wayne, Lizzy Borden and Joey Belladona. Yep, he is that cool and has that great a vocal presence. Certainly well befitting of the genre he has chosen to play and he is also a competent guitarist as the musicianship on this album is equal to any of your favorite metal releases from the past 30 years. Fellow bandmates Olivier Perrier, Jérôme St. Charles and Jean-Michael Perrier-Maurel provide equal parts shredding, scathing rhythms and lead guitars and also thunderous and meticulous bass and drums played competently through a plethora of pleasantly listenable and well crafted metal songs.

From the opening notes of the Maidenesque hard rock instrumental “Eat A Bag Of Hell” that throws the listener in front of the shred fest guitar prowess bus of Olivier and Maxim, through the thrash fueled thunder-dome of “Going To War” and “Doomsday Principle.” Up next is the “Hit The Lights” inspired, “Left To The Sharks” which is followed by the Megadeth “Peace Sells” styled cut with a massive melodic chorus “Make Them Fear Us” and then we are throttled back in our collective seats to a few old school thrash metal cuts in “Piercing Veil” and “The Evil In The Dark.” Only to wrap up this tasty platter with the “Gods Of Wrath”/”Lady Wore Black” inspired metal anthem “Shifting Sands” that truly showcases Maxim‘s vocal range as well as the band’s harmonic and melodic tendencies while they certainly do not let up on what brought them here, their trashy metal tendencies. All this certainly leaves us the listener with our collective jaws on the floor begging for more. Simply an amazing track on a very impressive and thoroughly enjoyable debut album.

It is simply amazing the amount of talented players and albums being released to nary a whimper these days only to be stumbled upon by us dedicated fanboys and girls. I am grateful to be afforded the opportunity to share these little nuggets with my friends. Warning Sign are one of these bands and have released such an album that begs your attention. Left To The Sharks is screaming for a label to properly issue and promote it and the brethren that created it. Warning Sign should have large aspirations — as large as the wall of music they have created. I can easily see these guys on a stage such as Wacken or even Rock N Skull playing their collective arses off to thrones of metal minions. Give these guys some props as they are worthy of your pennies and your appreciation to their metal cause.

First single from the upcoming album “Left To The Sharks”. Music and lyrics by Max Beaulieu. Mixed and mastered by David Lizotte at Stinky Weasel studio. Scr…

Title track from upcoming album – Left To The Sharks! Lyrics below!Music and lyrics by Max BeaulieuRecorded, mixed and mastered by David Lizotte at stinky we…