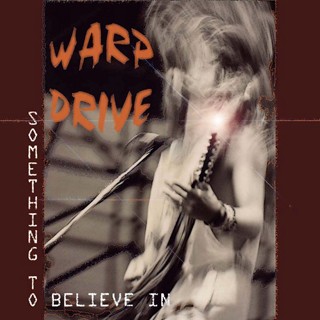 Review:
I didn’t think much of this album when I first got it — I had heard about Warp Drive before but never really listened to them because their earlier music didn’t work for me… it was OK, but nothing more. But when I put Something To Believe In, the band’s long shelved follow-up to Gimme Gimme, in the CD player I was really surprised.

Warp Drive have a clean, heavy, and melodic ’80s sound with sing-a-long lyrics — a real party-starter. Just about every song on Something To Believe In has a real good beat to it, and with a producer like Rickey Medlock (of Blackfoot and Lynyrd Skynyrd fame, who also makes a cameo on the title track) it’s bound not to fail. The disc contains tracks originally recorded between 1990 and 1992 with two bonus 2011 recordings.

Something To Believe In starts out with a cover of Axe‘s “Rock ‘N’ Roll Party In The Streets”, creating a heavier and more powerful version of the original. The energy of the opening track stays with the album all the way through, and I can’t say that there are any bad tracks on the entire CD. There’s the mandatory power ballad, “Hearts Done Time”, which is an excellent song, and then an instrumental piece called “Black Mamba” that was written early in Warp Drive‘s career and has often been used as a show opener. And then there is my favorite “Let The Good Times Roll”, with its lyric of “Feed ’em rock, the kind that gets bad down to the bone” — the heavy rhythms of this song makes me wanna dance on a table.

I say this AOR Blvd Records release is worth every penny. After listening to Something To Believe In I wonder if I should give their earlier album another chance… maybe I missed something?