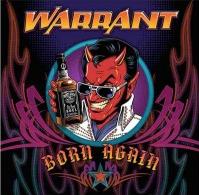 Review by Sarah:
The Cherry Pie loving rock and rollers are back with a new album and a goal to keep kick-ass rock and roll alive through their music. Although there is a new lead singer, and a different sound to the band, the music is still the same and you can still hear the same great riffs you heard with albums like Cherry Pie and Dirty Rotten Filthy Stinking Rich. Warrant has once again brought you a solid rocking album by the name of Born Again.

Jamie St. James fits well with the “Down Boys” and his sound is nothing but solid on this album. The sound is definitely back to the roots of hard rock and true to the times with such songs as “Love Strikes Like Lightning” and “Down In Diamonds”. Those songs bring back the true sound of what Warrant was when they were down on Sunset Strip.

Reviewed by Sarah for Sleaze Roxx, May 2006.

Review by James:
Ever notice that almost every band from whatever style they come from claims their new album will sound like the old stuff and never does? Well, someone finally made good on that promise!

Erik Turner said in several posts on the band’s official site that this record isn’t the band trying to break down musical walls or trying to be at all contemporary. It’s Warrant the way Warrant wants to sound and the way they never should have stopped sounding. In other words, as Erik put it, Born Again is the album that should’ve followed Cherry Pie.

The first important thing to note is there is a new lead singer in Warrant while Jani Lane continues his three year nervous breakdown. Jani is off playing classic Warrant material on solo tours when he remembers or is sober enough to show up. So, filling the bill as the new vocalist is Jaime St. James formerly of Black ‘N Blue.

The result of the new line-up is a band that sounds more like Warrant than Warrant has sounded in the past decade. Perhaps it’s the fact that the guys actually seem to like each other that results in this positive change? Regardless, this album is a throw-back but probably isn’t desired to be seen as one. It’s all new material with the classic Warrant sound that set them apart from the rest.

Songs to look out for? Well, there’s quite a few. Very few of the songs leave much to be desired as it is clear that the band made a conscious effort to put forth a complete album with all loose ends tied together… After all, this is their rebirth of sorts. It has to be perfect! That said, after a few times listening through, I’d say you might want to take a listen to songs such as “Dirty Jack” which has an “Uncle Tom’s Cabin” feel to it, “Roxy” which has a classic rock feel to it, “Hell CA” which has a very AC/DC meets Warrant sound to it, “Love Strikes Like Lightning” which has a very Black ‘N Blue vibe, “Glimmer” which is a ballad, and “Bourbon County Line” which has a Buckcherry meets Warrant vibe to it.

It is important to note that these songs all sound fresh and new. You can almost call this a re-debut or, as the title might indicate, a rebirth of Warrant as they aren’t trying to be who they used to be but being who they really are and that’s a sleazy rock ‘n’ roll band that made great music that became a trend but didn’t simply follow the trend.

Back to Jaime St. James, he sounds very strong on these songs and includes a lot of sleazy additions to the music like “yeah” and “ow” breaks that really add a lot to the songs. That’s part of what makes this album sound so fresh… Jaime sounds like he actually wants to be there singing for Warrant.

The negatives of the album? There aren’t many. The only ones I might mention are some song lyrics aren’t as deep as some of Warrant‘s other songs. That’s not to say the lyrics aren’t good, as that isn’t the case, and whatever lyrics I am not crazy about are made up for in the extremely strong guitar hooks and haunting choruses. But, that is something small that perhaps Jani‘s absence does subtract from the new record.

Overall, I must say I’m impressed. I went in excited about this record because I do love Warrant and am confident in Erik Turner not allowing the Warrant name to go on anything lacking in quality especially in this effort which is important to the band as they needed a new record to be a musical force and not a cover band of sorts. What I ended up getting is a really strong Warrant album that sounds like Warrant from 1990 and they aren’t sorry about it in the slightest. They want to play “hair metal,” so let them. People like me and others viewing this site will be more than grateful to hear it.

Is it a rebirth? I’d say take the CD case, hang it upside down, and spank that sucker on the ass. This baby’s been Born Again!