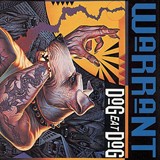 Review:
The Hollywood born Warrant brings about a certain amount of cynicism when mentioned in a musical conversation post 1991, especially when trying to defend such a great band from the 80’s. Their 1992 Dog Eat Dog release however was an album that could have changed this prejudicial and undeserved label that has been stamped on the band, had the likes of Kurt Cobain and company not convinced the youth of the early nineties that life is horrible and everyone should be depressed, not to mention the complete lack of support from their Columbia Record label.

The album starts with two tracks that most fly by night Warrant fans would recognize from some of their best of compilations. “Machine Gun” and “Hole In My Wall” both immediately give a somewhat darker and heavier direction than the more ‘pop’ sounds of their two previous releases. The raw energy of these tracks, along with “April 2031”, might give the listener the idea that this is a changed group with a new, darker sound. However once the brilliant melody of “Andy Warhol Was Right” kicks in, you can feel the classic Warrant sound loved dearly by fans of the band. “Warhol” is a very deep and intense song that really grabs the listener with its skillful lyrics, then proceeds to pummel your ears as a mind melting solo, along with ferocious drums, kicks in. It is arguably the best track on the album.

From “Warhol” on the album oozes the classic sounds of Warrant with some of the hard rocking highlights coming from “Hollywood,” “All My Bridges Are Burning,” and the heaviest track on the album “Inside Out.” “Sad Theresa” is somewhat of a ballad and is another track that really hits you with a nostalgic sound, conjuring up images of Jani Lane strutting on stage with his acoustic guitar and belting it out into the mic stand.

There are a few other ballads in “Quicksand,” “The Bitter Pill,” and “Let It Rain”, that may have shown why, when looking back, the album at the time did not get much push from Columbia Records, since grunge was now the ‘in’ choice of the nineties and power ballads and good time rocking was ‘out’. Still, there is no doubt if you liked the sounds of Dirty Rotten Filthy Stinking Rich and Cherry Pie, you need to pick up Dog Eat Dog and crank it loud!