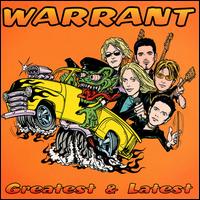 Review:
Warrant is a band that has had albums where I had no reason to get up and hit the fast forward or hit the “skip” button to avoid a bad song. Why? Because there are no bad songs on them! Their classic Cherry Pie is an example of an album like this. But Greatest & Latest, while overall a very good product, is not an album like this.

The album opens with “Cherry Pie” and right away one realizes this is an album where the band went back and re-recorded all their classics. To be frank, I like this version of “Cherry Pie” more than the original. It is a bit heavier with the same general feel and appeal. The most clever dirty song ever written!

“The Jones” is the next song and this is part of the “Latest” in the release’s name. This is a new song but fails to really excite me. I do love the line, “Lets go steal the VCR!”, something about that makes me smile – no, I’ve never stolen a VCR!

The new version of “Down Boys” is pretty good. Because “Down Boys” is one of my favorite Warrant songs, I have to say the original tops this one but that is not to say this version isn’t cool.

“Hollywood” is next. I didn’t care for the original version of this song but I do like this version.

“Sometimes She Cries” has a different beginning and loses a little something because of it. In addition, Jani‘s voice cracks pretty noticeably when singing the high note of “doing wrong.” I like this version but the original tops it.

The new version of “32 Pennies” is pretty good. I actually think the heavy guitar mixed with Jani‘s scream just prior to it adds a new element to the song that wasn’t on the original, but it is hard to top the original.

“Heaven” is such a beautiful song. I love both versions but oddly find myself liking this version more. I guess the heavier guitar riff speaks to me.

“Thin Disguise” proves to me that Warrant can still kick the living crap out of any “nu-metal” band out there. I love the original and this one is just as good. Wow!

“I Saw Red” reminds me of my former fiance. The original is beautiful and the acoustic version on their Greatest Hits release is as well. This version welcomes the piano to the musical mix. It’s pretty good but Jani‘s voice doesn’t seem to carry the emotion of the two previously mentioned versions of the song.

“Bad Tattoo” is a really good original song. The guitar work reminds me a little of “Enter Sandman” by Metallica, who I absolutely hate. But this is a contemporary sound with classic Warrant hooks – I dig it!

And then the album hits the skids as remixed versions of classic songs are thrown in at the end. I hate techno music – it takes no talent to make things sound like Rosie from The Jetsons singing – absolute garbage.

I love Warrant and this album is actually a good one to get minus the terrible songs mentioned above. Jani Lane is now out of Warrant and Jaime St. James from Black N’ Blue is in his place. I still have yet to see Warrant with Jaime, but am looking forward to it. Dee Snider said, “It’s good to see Warrant songs performed with some passion again.” I love Jani but if he truly did not enjoy doing Warrant songs maybe it is good for everybody that he left the band. Oddly, he performs Warrant songs on his solo tours – check your logical thinking at the door!

Pick this album up if you like classic Warrant and want to hear a new spin on the classics.