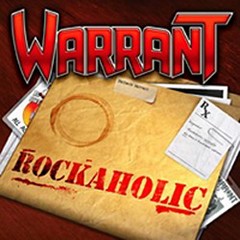 Review:
My name’s Robert and I’m a ‘Rockaholic’… Wrong band, but the absolutely right singer to try something new.

Robert Mason‘s first full outing with Warrant is here, and Rockaholic is the album’s name. This CD is such an improvement over 2006’s Born Again with Jaime St. James on vocals, which was frankly disappointing, as this one has the polished sheen of an experienced band trying to deliver a classic ’80/’90s rock feel. Be warned though… as you know, you can’t polish shit.

Kicking the album off is “Sex Ain’t Love”, a lovely paced head-nodder that will fit nicely into the live set — Mason sounds amazing and its evident he’s taken a strong hand in the song writing and arrangements. “Innocence Gone” is next and fits in well — it’s not an outstanding number by any stretch of the imagination, but solid enough to keep my interest. “Snake” follows in the same vein but is a bit mellower, although it’s slower tempo fits in nicely. “Dusty’s Revenge” has that cowboy western feel to it and is a good solid song with nice harmonies that shows a slightly different side to the band.

“Home” is currently getting the video treatment thrust upon it and while it screams ’80s power ballad and is a tight number, it is the wrong song to release as the single if Warrant wanted to come out and grab the fans by the balls. Putting the lighters away comes another solid number in “What Love Can Do”, which is very Lynch Mob sounding (not a bad thing as you all know). “Life’s A Song’ continues the theme onwards — but its beginning to sound all the same now and I’m getting bored. Then we get to “Show Must Go On” and my faith is restored — catchy, fast and it allows Mason to unleash his voice. A distinct jump in pace, energy and excellence from the last few numbers, the only criticism is that the song is too short. Keeping with the higher energy the band deliver the fast and angry little number called “Cocaine Freight Train” which is another top tune.

“Forever Found” is another ballad — after all, what’s a Warrant album without a few? It is better than “Home” but it disrupts the feel of the album after the previous two great numbers. “Sunshine” is a boring track, complete filler, and I would go as far as to say that this shouldn’t be on the album followed by “Tears In The City”, another ballad…. Oh dear, skip. I’m actually having heart failure here at the thought of Rockaholic closing with another bad song. Thankfully “The Last Straw” fills my ears with sonic delight as a wave of relief hits me. It is another great fast-paced chest-thumper that will have you banging your head against the speakers.

Now don’t get me wrong, Rockaholic isn’t a bad album (far from it). Maybe the anticipation of a new album with Robert Mason on lead made it fall short of what I expected, but it has some moments — some really good moments. There are a lot of solid numbers, three ballads and one song that’s utter drivel. Warrant with Mason works well when it’s going fast, furious and in your face but slowing things down kills the energy and excitement that Mason generates and it happens too often here. The song placement also seems out of order, so to my ears the album doesn’t flow properly and makes it less enjoyable than what it could be. There’s a lot in here — early ’80s stuff, the classic Warrant sound, some Lynch Mob reminiscent numbers and it’s all mixed together… sometimes successfully, sometimes not.

And before it’s said out loud, Jani Lane was not Warrant and in my opinion couldn’t hold his own with Robert Mason. If Lane sang on this album and it was on fire I wouldn’t cross the road to piss on it. As it stands, I’m a fan, and I’m a bit let down with Rockaholic — enough said.