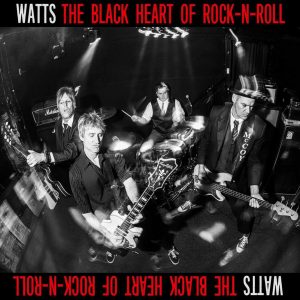 Review:
To set the table, Watts are four guys out of Boston who profess their enthusiasm for AC/DC, KISS, Cheap Trick, and the Rolling Stones. Their full length album The Black Heart Of Rock-N-Roll was released on July 8th to some pretty impressive media fanfare. I know these guys aren’t spring chickens. They have been around for a while, absorbing many different sounds and influences throughout the years. I’ll give them credit for that before even making an assumption on the album.

On first listen, The Black Heart Of Rock-N-Roll didn’t do much for me. I don’t know who sang the title track, but the vocals were gravelly to the extreme, like laid back Bob Dylan combined with Brian Johnson. The thing is, once you take that song in context with the rest of the album, it does make sense, as the band shares lead singer duties for the most part. The song “Black Heart” does rock once it gets itself involved.  Many of the songs on this album are driven by the back end — bass and drums — which is refreshing. Certainly “Up All Night” and “She’s So Electric” are examples of that. Once it gets started, “She’s So Electric” in particular has a vocal line and beat that could have derived from Steel Wheels era Rolling Stones.

“Strut (Like A Champ)” hits you like an AC/DC tune — flat out rock n’ roll without the nonsense. It even has flavours of The Replacements‘ “I.O.U.” in the guitar riff.  OK, that’s an obscure reference, but it’s funny what comparisons come to you when listening! “Stage Fright” has a cool little 1920s intro that kicks up into another rocker. “Fast And Loose” literally plays fast and loose with instrumentation, that comes across as lazy and slurred, but that’s only for effect. “She broke my will, then she stole my shoes….” kind of says it all. “Sunset” takes me back to the Black Crowes, or maybe London Quireboys style…. or what the hell, more Rolling Stones. The guitars play a tease while the bass and drums carry the tune.

It took me several spins to understand this album — the sound it was going for and what Watts are trying to accomplish. I’ve turned 180 degrees and determined this is a must-listen. It has its influences, but is not derivative. Watts doesn’t try to be anyone but themselves, and I give them credit for that above all else.

Watts‘ “Up All Night” video:

Watts – Up All Night

Classic Rock Magazine says: Rock is in a steep decline and, who knows, maybe it’ll be as dead as disco in a few years. But the beauty of Watts is that they…