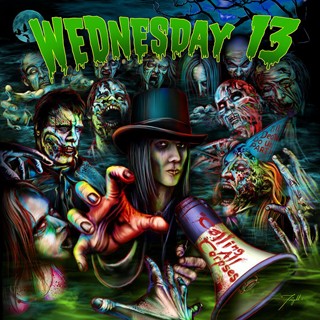 Review:
Take the album title Calling All Corpses, and the average person would expect something based around a campy horror movie or a macabre TV show like The Musters. If this was your initial thought, you’d be right. Calling All Corpses is the first new full-length studio album since 2008 from Murderdolls frontman Wednesday 13, and going back to the ghoulish fun of The Frankenstein Drag Queens, this new release contains tongue in cheek lyrics and even more horror punk hooks than last time.

Sitting at the top in its rightful place, “Blood Fades To Black” contains anthemic qualities fit for an opener — equip with gang vocals, strumming guitars and a melody-stricken harmonica played by the man himself.
The upbeat “We All Die” and title track “Calling All Corpses” together remind us that although Wednesday 13 carries the torch for his unique sound, he still manages to pin a whole new twist on it, and just as he claims “Bad At Being Human” — dedicated to Lux Interior of The Cramps — we witness yet another fine example of such ‘twist’, through the reincarnating of an earlier ghost off the Murderdolls‘ 2002 debut, Beyond The Valley Of The Murderdolls.

Slowing things down and ‘protruding’ much beauty (although lyrics suggest otherwise), is guitarist Roman Surman who quickly takes the lead in “One Knife Stand”, showcasing just how much talent he has through melodic guitar solos and party-rock riffs — his techniques appear to compliment Wednesday 13‘s vocals and the other band members’ virtuoso nicely. But the key highlight on Calling All Corpses (where the magic really kicks in) is the spin-off and semi-cover of The Ramone‘s “I Wanna Be Sedated”, titled as “I Wanna Be Cremated”. It’s hard enough to cover a song from a legendary band as it is, but to put your own stamp on it and actually pull it off is rare.

Calling All Corpses plays down the distortion of 2006’s Fang Bang, and instead revives the party-rock persona of 2005’s Transylvania 90210 — and it’s through songs like “Ghoul of My Dreams” and “Silver Bullets” where this is felt. Combining the bubble gum elements of horror with the most sinister facets of punk, Wednesday 13 makes for a clever but careful play on the genre — by retaining the ghoulish sound he is famed for with horror hooks that tilt more towards punk than metal.

As always, starting with a bang and ending in celebration, Wednesday 13 proves he has it in him to be up there with the greats like Alice Cooper and Rob Zombie. In a nutshell, he is undoubtedly the B-Movie’s answer to the music industry… but with a higher budget!