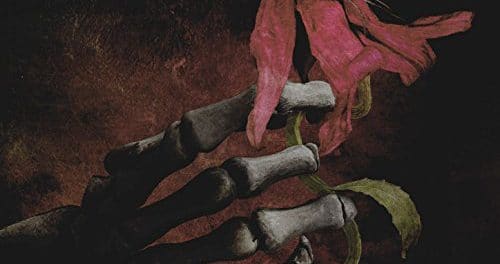 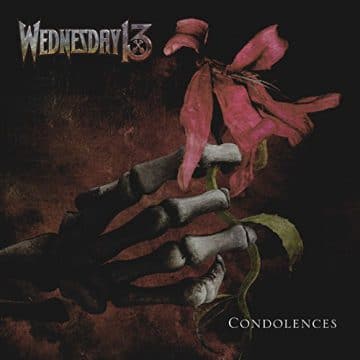 Review:
Horror rock maestros Wednesday 13 have unleashed their seventh album Condolences upon us and their first with Nuclear Blast. There is one word to describe the album and the band in general. And that word is ‘consistent.’ They consistently provide their fan base with the same old sound, the same old lyrical content and the same old image. But you know what? It works, and that is the way fans like it.

If you have ever heard any of Wednesday 13’s previous albums, or songs for that matter, then you won’t get any surprises with Condolences. It’s more of the same from the band, sticking to the well worn formula of deep chugging guitar riffs, squealing guitar melodies, pounding drums and guttural vocals that spit out horror themed phrases in spooktacular fashion. And despite Wednesday 13‘s gloomy image of black leather, eyeliner and pale skin, they don’t take themselves too seriously, with the lyrical content of many songs having a comedic or light hearted element.

Condolences opens with the short instrumental “Last Rites” before dropping us straight into the down tuned notes of “What The Night Brings” which was the first video clip released for the album. The trademark squealing guitar adds a haunting melody over the top of the song which proceeds to bound along in the usual Wednesday 13 manner. Next up we have a short movie scene audio quote, which is another Wednesday 13 trademark, before jumping into “Cadaverous.” The frantic opening riff is soon shifted down a gear momentarily with a sole thundering bass line in the verses before shifting back to the momentum of the riff. In what seems like a common theme to many of Wednesday 13’s songs, or maybe I’m thinking Murderdolls, the lyrics of “Cadaverous” center around grave digging and having some quality time with the contents — ‘Stiff and rotten, dressed in blue, I’ve got a confession to make, I wanna get inside of you.’ See what I mean when I say comedic and light hearted? Fun for the whole family!

“Blood Sick” — the second video clip released for the album follows — before we move into the pounding drum beat of “Good Riddance.” The drumming on this song is great with the beat pattern in the verses giving the song a very tribal feel. “You Breathe, I Kill” starts off sounding very thrash metal based before reverting back to the usual Wednesday 13 style. But before we know it, sections of the song jump back into the thrash metal style giving it a good structural variety. The smoking guitar solo, which is also very thrash metal based, is a pleasant surprise and overall this song is quite enjoyable. Another cut scene audio quote later and we are off to worship the devil in “Omen Amen” which is probably one of my favourite songs on Condolences. It’s simple, it’s groovy and it’s infectiously fist pumping.

Third single “Cruel To You” is up next and is a fun song with a catchy chorus. If you haven’t already, I urge you to watch the cool video clip for the song below. It’s chock full of b-grade comedy horror goodness. We round out Condolences with another short instrumental called “Eulogy XIII” and the songs “Prey For Me” and “Lonesome Road To Hell” which continue the same formula and style used throughout the album. The title track “Condolences” changes things up a little bit by introducing a piano introduction and piano accompanied sections. This results in a nice moody piece of music with quieter verses that morph into powerful choruses. “Death Infinity” closes out the album and is similar to “Condolences” with its peaceful and serene introduction before launching into an angst fuelled ending.

The trick to Wednesday 13’s songs is that they don’t overstay their welcome. They get in and out before becoming too repetitive. The riffs and chord progressions are simple and have been recycled a million times before, making them instantly familiar and likeable. Production wise, all of Wednesday 13’s previous albums have been sonically bombastic and best played loud. Condolences is no different.

Wednesday 13 are an acquired taste and won’t appeal to all music fans. For some, the music will be too basic, followed by the comment “I’ve heard it all before.” For others, the vocals will be too coarse. But for current fans of the band, Condolences is everything that they would have expected, or needed.

WEDNESDAY 13’s official music video for ‘Condolences’ from the album ‘Condolences’ out now! Order at http://nuclearblast.com/wed13-condolencesSUBSCRIBE to Nu…

WEDNESDAY 13’s official music video for ‘What the Night Brings’ from the album ‘Condolences’ out June 2, 2017 Order at http://nuclearblast.com/wed13-condolen…

WEDNESDAY 13’s official music video for ‘Cruel to You’ from the album ‘Condolences’ out now! Order at http://nuclearblast.com/wed13-condolencesSUBSCRIBE to N…