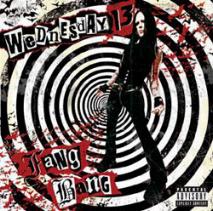 Production:
Produced and directed by Wednesday 13.

Review:
I’ve had a couple people telling me to check out Wednesday 13 for awhile now, but being the procrastinator that I am I didn’t give the band a listen until Fang Bang arrived in the mail. Then when I saw the silly and campy song titles I started to wonder what the fuck I had got myself into.

But Fang Bang is actually pretty good. It is like Skid Row teaming up with Alice Cooper to record the soundtrack for one of the horrible Friday The 13th movies. “Till Death Do Us Party” even mentions Jason and Crystal Lake!

“Morgue Than Words” kicks things off and is a fast romp that teeters on the edge of full blown punk. “American Werewolves In London”, “Faith In the Devil” and “Buried With Children” are some other songs worth checking out. But my favorites are “Too Much Blood” which sounds like Sebastian Bach in overdrive and “Burn The Flames” which is straight out of Alice Cooper‘s macabre handbook.

Really the only song on the whole album that I didn’t care for at all was “Die Sci-Fi”, the rest of the album was above average.

As much as I would have loved to give this album a shitty review to show a couple friends that they are screwed in the head, I can’t do it. Because being the huge Alice Cooper fan that I am, there are just too many similarities for me not to enjoy Fang Bang. This is like one of those B-movies that are so silly and fun that you can’t help watching it every time it comes on the TV.