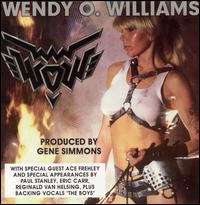 Review:
This is the first solo outing from the ex-Plasmatics singer Wendy O. Williams. Gene Simmons of Kiss produced and played bass (under a pseudonym) on this effort that featured Ace Frehley, Paul Stanley and the late Eric Carr as guest musicians. Songs like “I Love Sex (And Rock and Roll)”, “Priestess”, “Bump ‘N’ Grind” and “It’s My Life” (the video featured Wendy performing dangerous stunts herself) really kick your ass! There is also the slower paced “Opus In Cm7”.

Williams played loud and in your face metal similar to a female fronted Judas Priest. Sadly she took her own life in April of 1998. Wendy O. Williams was truly a visionary ahead of her time and genuinely loved metal; I have nothing but the utmost respect for her as she had the guts to be different. Wendy is greatly missed and WOW deserves two thumbs up!