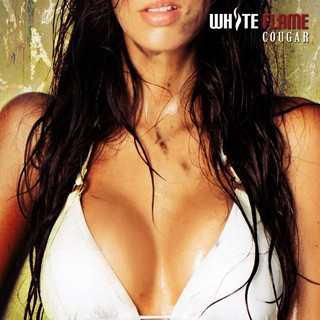 Review:
It’s been a few years since I last heard White Flame, dating back to their 2007 debut Yesterday’ News, but I don’t remember them being this good! Maybe all it took was the guidance of famed producer Chris Laney to take these Finnish rockers to the next level. Whatever the reason, Cougar is a great album that takes several twists and turns.

“Get What’s Mine” starts the festivities with opening vocals that remind me of Megadeth‘s Dave Mustaine — but don’t worry, this isn’t thrash, and by the time the chorus comes along any similarities are quickly forgotten. The album’s first single, “I Know Where You Live”, was co-written by Laney and his signature sound is instantly recognizable. This song finds vocalist Vince doing his best Alice Cooper impression before breaking into a huge and melodic chorus — this track could easily have found its way onto Laney‘s Only Come Out At Night solo release. The title track shuffles along with a hint of Aerosmith blues while the funky “What Girls Like” is extremely catchy for a type of music (funk-rock) I usually can’t stand.

“Right Back In” is about as heavy as White Flame get as guitarist Anthon really shows off his chops, and even better yet is the hard-hitting “We Get It On” which finds the Aerosmith vibe resurface for a second time. The band take Roxette‘s successful hit “The Look” into Gotthard territory — it’s not a bad cover at all, but in my opinion was a poor choice for the album’s second single. Rounding out the CD is “Gutted”, a rocker with hints of ’70s revisionism, and “The Question”, which begs the question why wasn’t this one left on the studio floor? The closing track is really the only time White Flame stumble on this release.

Every warm blooded male wants a ‘cougar’, and everyone with a set of ears should want this Cougar — besides, this is one of the few times where the album actually lives up to the artwork. White Flame offer several different sounds on this album yet everything seems to tie together perfectly. From rockers to ballads, White Flame have shown that sometimes it takes a little experience to hit your stride — and Cougar finds White Flame taking the hard rock torch and running like hell!