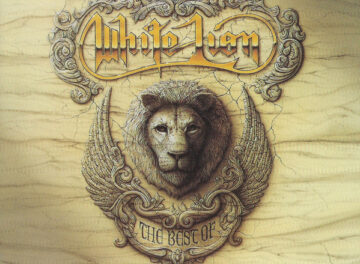 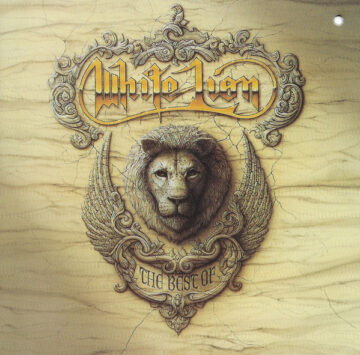 Review:
In 1992, I was a senior in high school (yikes has it been that long?) in Columbiana, Ohio. There wasn’t a day that went by where I wasn’t jamming out to either Sammy Hagar‘s solo work or his Van Halen releases, one of my other favorite bands was White Lion. My best friend who was a guitar player talked frequently about the skills of Vito Bratta‘s guitar work, where he was on the cover of all the guitar magazines and the band was featured in many music magazines thanks to frontman Mike Tramp being a favorite of the females. But for some reason, with all the talent the band had, they still don’t get the respect to this day that they deserve in my opinion. Maybe because by 1992 the music scene was changing and the band was lumped in with being another blond front man glam rock group?

The Best of White Lion was the band’s first greatest hits release, featuring the successful albums of of Pride, Big Game and Mane Attraction, leaving out their first official release Fight To Survive but the songs here that were originally on it were re-recorded for Mane Attraction. One of the first songs that exposed me to the band starts the release with “Wait,” the catchy track that got MTV video play. When Pride came out, I was in junior high hanging out with a fellow drummer who had the cassette, where we would listen to the album many times, along with watching the movie Trick Or Treat, with Gene Simmons of KISS. I like the song immediately because it was a mix of rock and pop, which was something I was always into, even when some of my buddies were going into the harder edge music later on in high school like Metallica. “Wait” is a wonderful opener.

I have said it before in my various writings, but the band’s version of “Radar Love” is my favorite and in my opinion better than the original. It just has an added level to the song, especially with drummer Greg D’Angelo on it. Although not a major fan of the song as a whole, if I’m gonna listen to it, it’s gotta be White Lion‘s version with the solid rhythm section of D’Angelo and LoMenzo. “Broken Heart” may start like a sappy love song, but kicks in nicely to rock out showcasing the talents of the band, proving they weren’t just an image for the female fans. Vito‘s Eddie Van Halen-style guitar solo throughout adds to the track, and the unique voice of Tramp separated them from the others.

After the driving “Hungry”, “Little Fighter” is up next, which I wrote for the review for Big Game back in 2019 that “the lyrics are so positive and uplifting that it could have been about facing hard times and overcoming them, which is how I interpreted it. This song was in my workout playlists,” and “The name “Little Fighter” at the time, would have been a great name for a 1980s pro wrestler, where the song could have been used. The guitar work, along with the dynamics of the song, gives its appeal to me. This song was, for a while, my “Eye of The Tiger” — a theme song for me when it came out.”  My favorite album by the band will be Big Game and will still stand behind it.

“Lights And Thunder”, at over eight minutes long, I admit sometimes gets passed over when listening but the guitar work is awesome listening to it again for this review. Tramp‘s vocals are in a lower range, as opposed to the higher level, which again, shows he wasn’t just another in the genre, along with the band’s songs about social issues in the lyrics, and not just about love and partying. This is a heavy song as well in power as well, and shows the band wasn’t just a glam band. I have a love/hate with many greatest hits releases in that sometimes they are marketed as label money grabs without giving fans anything extra or worth buying if I already had the studio work. This, being the first compilation release, the label gives live tracks in “All You Need Is Rock N Roll” and “Lady of The Valley” which is a nice treat. For someone who never got the see the band live, this was as close as I would get to it, so it is still appreciated now that the band is no more.

One can’t have the greatest hits without the band’s biggest track “When The Children Cry.” Many, especially females in my school, loved the song because it was a ballad, but I also enjoyed the fact that it wasn’t just about love and had deeper meanings in the lyrics. Sure, it’s not as recognized as a social/political gem like John Lennon‘s “Imagine,” but the song is still played on the radio in my area to this day at times.

“Love Don’t Come Easy” from Mane Attraction is a wonderful track that I’m glad is on here. When I bought Mane Attraction, it was not well received by me and my buddies who were into the band coming off of Big Game, but this single reached the Top 30 on the U.S. Rock Charts, and had video airplay. I enjoyed watching the video for Vito‘s fingering on the fretboard, and how the song builds throughout the first verse into the chorus. The dynamics of the song gave it a pop flavor. Even though the video besides that was somewhat weird, with a guy in a theater watching a girl swimming and diving made me wonder even back then what was going on, I kind of knew the scene for the band was ending.  It’s still a song that holds up and isn’t dated.

“Cry For Freedom,” and the live “Lady of The Valley” continues the nice flow of the songs in the placement of their positions and gives listeners who may only know the singles a deeper dive into the band’s work. “Tell Me” is still one of my favorites of the band’s songs. Reading now how low the song charted on the U.S Hot 100, it’s shocking because when it came out, the song was played all the time on my local radio station and at the dances. Sure it hit #25 on the rock charts, but I would have bet it was a higher-ranked song overall due to its catchy singable chorus.

The irony of ending the album (at least the U.S. version) is “Farewell To You,” which also ended the Mane Attraction release. Sure the song is a celebration of the fans coming to see the guys on the road at the shows, but there is one of those eerie feelings knowing that it is also the last time we heard from the band’s glory years. Tramp went on to revive a few versions of the band until going solo, and other members went to join different bands, and Vito quit the biz and we are still wanting him back. Credit to him for sticking to his guns and not compromising his happiness, but it is similar in a way to the glory years of The Georgia Satellites with the Dan Baird era. For such a short run, White Lion, like the Satellites, put out underrated limited studio albums and deserved to be in the category of bands that should have had longer careers with the lineup that was in the spotlight.

I would personally like to have my favorite ballad “You’re All I Need” on this collection (it was on some imports), and maybe something like “Living On The Edge” or “Goin’ Home Tonight” as well (but then again, that’s what makes me love Big Game so much), but overall this is a wonderful selection for fans who only knew the hits while still giving them some added depth to the group’s limited releases, especially since the band was already done by the time of the release. This was one collection that doesn’t disappoint in any way and is filled with musical excellence all around from the lyrics, to catchy pop/rock and hard rock mixed all in over an hour’s worth of listening pleasure.