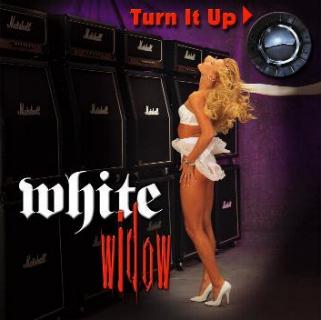 Review:
This is the debut release from this talented group of Minnesota sleaze merchants; the cover alone should indicate that Turn It Up wouldn’t be for the faint of heart. “Greatest Show”, “Turn It Up” and “Hangin’ Bangin’ really rock, as does the their rendition of the classic “Shakin’ All Over”. Of course, for a band who’s sound is firmly stuck in the 80’s, you have the mandatory ballad “Fallin’ In And Out Of Love”.

White Widow aren’t afraid to play music from a genre that has been ridiculed for over a decade, and hair metal groups such as Dokken, Cinderella and Dangerous Toys come to mind while listening. Relive the past with Turn It Up, a disc that receives two thumbs up!