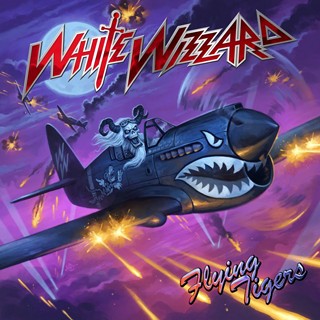 Review:
At the tail end of the year White Wizzard unleashed one of the best efforts of 2011. Who would have thought that a band as dysfunctional as White Wizzard was capable of following up the fantastic Over The Top with an even stronger effort? Since the release of 2010’s Over The Top, Los Angeles’ White Wizzard has seen several line-up changes. Returning on the new album Flying Tigers are drummer Giovani Durst, singer Wyatt ‘The Screamin’ Demon’ Anderson and founding member Jon Leon on bass and guitar. Unfortunately, since the completion of this album Anderson has been replaced on the microphone by Michael Gremio (who doesn’t appear anywhere on Flying Tigers)… and the revolving door continues.

If you’re familiar with White Wizzard you know that they are cut from the same cloth as the greats from the New Wave of British Heavy Metal. If you’re into grinding riffs and big thick galloping bass lines you’ll surely get a rise out of Flying Tigers. Wyatt ‘The Screamin’ Demon’ Anderson put on a memorable and ferocious performance on this disc, which leaves huge shoes to fill for current singer Michael Gremio — the saying ‘you’ve got your work cut out for you’ seems fitting here.

The first half of Flying Tigers is a traditional metal album with songs that feature unrelated topics and themes while the second half is a concept album conceived by leader Jon Leon. The last six tracks make up an ambitious and progressive suite with interlinking songs containing supernatural and celestial themes. Leon raised the bar with the opening track of the concept, “Fall of Atlantis” — the driving bass line, hook and chorus on the song will have the haters doing an about face as the lyrical content is unsurpassed. I’m partial to the tracks “Flying Tigers”, “West L.A. Nights”, “Night Stalker”, and “Night Train to Tokyo”, which are not part of the concept portion of the album.

Having witnessed White Wizzard live a twice this year with Michael Gremio on vocals, I’ve got to say that he is spot on vocally to Anderson‘s performance. Don’t be surprised if this album sneaks up and snatches a spot on metal aficionados’ top 10 lists of 2011 — it’s that good. Now, if only Jon Leon would get a stable line-up.