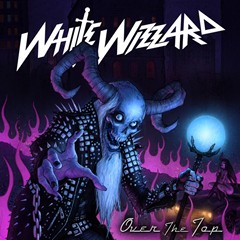 Review:
Bassist and primary songwriter Jon Leon cleaned house after the recording of White Wizzard‘s debut EP High Speed GTO. He brought in some new faces and fresh talent and took the act on the road. Touring has done White Wizzard good as they have gelled and it shows on their full-length album Over The Top. The difference between Over The Top and High Speed GTO is like night and day, still present is the NWOBHM influence, but these songs are stronger, tighter, and bury just about anything on the EP. It’s like Paul Di’anno era Iron Maiden meets Saxon meets Angel Witch. The addition of former Overloaded guitarist Erik Kluiber and singer Wyatt ‘Screamin’ Demon’ Anderson are excellent upgrades and strengthened those two areas within the band.

White Wizzard are more than just a novelty as Jon Leon is determined for this band to break big. Whether they will or not remains to be seen, but clearly Leon has risen from the ashes with a stronger line-up, better songs, a will of steel and a sense of urgency that I haven’t heard in years. It would have been great if White Wizzard would have included a new version of “High Speed GTO” with the current line-up, as it will become, in all likelihood, the band’s signature song. A couple of the standouts on Over The Top are the title track, “Live Free Or Die”, “Strike Of The Viper” and “White Wizzard.” There’s just something about a band like this that doesn’t over think things — the old saying ‘less is more’ couldn’t be any more true than with White Wizzard.

The verdict is that White Wizzard is an up and coming band with an old school sound that both purists and newbies will enjoy.