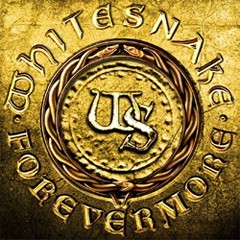 Review:
In the summer of 2009, after main ‘Snake and front man David Coverdale blew out his voice, his future was seriously up in the air. It was gut wrenching to watch the footage of Lord Coverdale being reduced to mere mortal status — but David went home and vowed to be back.

Whitesnake‘s last effort, 2008’s triumphant return called Good To Be Bad, was a strong and well written effort that featured material that was akin to their late ’80s glory. On Forevermore, Coverdale once again put together a group of highly skilled musicians that includes the returning guitar duo of Doug Aldrich and Reb beach. Like much of Whitesnake‘s storied career however, there is a revolving door policy — as the band is joined by new recruits Michael Devin (Lynch Mob and Kenny Wayne Shepherd) and Brian Tichey (Billy Idol, Pride & Glory, Foreigner and Lynch Mob). As with previous line-ups, Coverdale has once again reloaded Whitesnake with talent, and the new rhythm section has taken the band to another level.

Forevermore picks up where the band left of on Good To Be Bad, while simultaneously retracing its roots. On the new album we find David Coverdale and Doug Aldrich digging deep and returning with vintage Whitesnake blues-riffs and a grittier and harder sound. To say that on Forevermore Coverdale and Aldrich collectively borrowed the best elements from each Whitesnake era of the band’s illustrious 34 year career isn’t a stretch by any means.

Coverdale himself sounds stronger than ever on this album, of course there will be doubters until he does it live. Forevermore is a strong effort from beginning to end — the highlights include the stompin’ “Steal You Heart Away”, the ultra catchy lead single “Love Will Set you Free”, the Rolling Stones influenced “I Need You (Shine A Light)”, the ’87 sounding “Dogs In The Street”, the absolutely beautiful ballad “Fare Thee Well”, the bluesy “Whipping Boy Blues” and “All Out Of Luck” which reeks of the band’s ’80s excess.

Forevermore, thus far, is the rock album of the year… bar none.