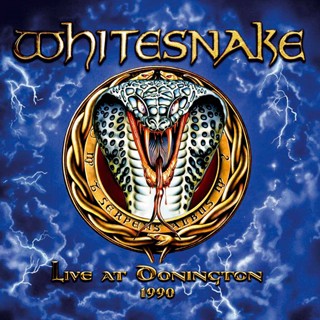 Review:
Whitesnake has issued many live offering of the past 5-6 years — from DVD’s to live material included in the expanded/deluxe packages of the 1987 self-titled album and Slip Of The Tongue and even a bonus CD of live material on certain pressings of Good To Be Bad. In short, the ’80s and ’90s Whitesnake eras are well represented in live form.

Frontiers Records has dug into the archives and obtained the rights to Whitesnake‘s 1990 appearance at Donington (or ‘The Monsters Of Rock’) — and for those that are keeping track, the festival has since been renamed Download. Live At Donington 1990 captures Whitesnake with a python sized hangover of post ’80s excess. Don’t get me wrong, the band sounds great, and even though David Coverdale‘s vocals are a little worse for wear all in all this is an honest and untouched live recording. In fact there are times where Coverdale clearly struggles hitting the high register notes, but the lower notes sound strong.

Coverdale upgraded the band after the departure of Vivian Campbell and John Sykes with Steve Vai, a flashy and flamboyant guitarist who was too over-the-top for even Whitesnake at the time — although he clearly outshined Adrian Vandenburg. Slip Of The Tongue, the one and only studio album to feature Vai, was a slick record that didn’t have as much of the grit like we heard on Slide It In and that the band still possessed on 1987’s Whitesnake. The new music was easy on the ears and very radio friendly, but by that time radio was starting to do an about face and turning on the acts that had made radio and MTV what it was in the ’80s.

Live At Donington 1990 isn’t a complete cash grab because there is some historical value to this recording. It was Whitesnake a couple of notches below their peak — this was the end of the band as we knew it until a haphazardly put together line-up surfaced in 1994 and toured Europe. However it wasn’t until 2002 that a proper band was put together that gave the 1987 touring line-up a run for their money.

All the hits are represented on Live At Donington 1990 — polished versions of “Slide It In” and “Slow An Easy”, followed by “Cryin’ In The Rain”, “Cheap And Nasty”, “Fool For Your Loving”, and the epic “Still Of The Night”. In addition to the audio discs there’s also an accompanying DVD on most versions of this album. You can’t really lose here, but if you’ve got any of the aforementioned Whitesnake releases Live At Donington 1990 might be a hard sell for the casual fan.