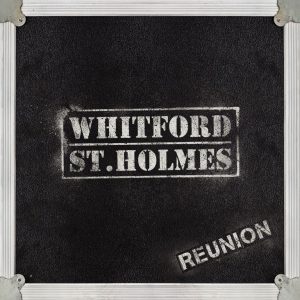 WHITFORD/ST. HOLMES
REUNION
To be released on June 3, 2016 (Mailboat Records)

Review:
God bless Brad Whitford. While his singer is out pandering to the ‘bro country’ crowd and his co-guitarist is touring with a glorified cover band; he’s reached out to singer/guitarist Derek St. Holmes and reunited to do another Whitford/St.Holmes album. The latest effort was issued independently in the fall of 2015. The album appropriately titled Reunion will be released on June 3rd, by Mailboat Records who have issued records by Sammy Hagar, Bret Michaels and Joe Elliott’s Down ‘n’ Outz in recent years.

There are many reunions that don’t have the same chemistry that the initial partnership had… that isn’t the case here. Derek St. Holmes can still sing; his vocal abilities are on par with what we have heard on the Ted Nugent records where we first discovered him. He’s got soul, he’s got charisma and he can sell the song — even the ones that aren’t as memorable. While targeted as a ‘rock’ record, Reunion does have some tracks that are on the ‘lighter side’ and might have crossover potential. A perfect example of a ‘softer’ moment is “Tender Is the Night.” There’s just a great poppy ballad with a little twang to it. No surprise there as the duo currently resides in Nashville.

While there’s nothing ‘ground breaking’ taking place on Reunion, it is however a fun record that showcases amusing moments like “Hot for You,” “Catch My Fall,” and “Shake It.” Whitford/St. Holmes left off where they did in in ’81 on their ‘self-titled’ debut; delivering soulful, no frills, catchy, rock ‘n’ roll. It would have been fantastic to have heard more over the top guitars on the ‘rock’ tracks, but it is a solid record nonetheless.