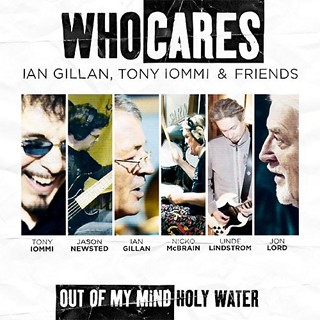 Review:
Tony Iommi and Ian Gillan first recorded together as Black Sabbath in 1983 and released the poorly received Born Again album. They went their separate ways soon thereafter, but in 1989 the duo crossed paths once again when they were involved in the re-recording of Deep Purple‘s legendary “Smoke On The Water”. The purpose of that collaboration was to raise funds for victims of the Leninakan earthquake that struck Armenia in 1988. In late 2010 Iommi and Gillan traveled to see how the funds raised were utilized and, ironically enough, found that the only building that hadn’t been rebuilt in the 20 years since the tragedy was a music school.

During their travels in Armenia Tony Iommi and Ian Gillan were praised for their efforts and decided to team up once again in an effort to raise funds to help rebuild the very school mentioned earlier. They elected to call themselves WhoCares, which sounds appropriate enough, and the result is a single that was first released via iTunes and will see the light of day as a physical CD release via Armoury Records on June 21st. The CD features the two tracks recorded, “Out Of My Mind” and “Holy Water”, along with an enhanced portion that documents Iommi and Gillan‘s involvement to the Armenian cause.

“Out Of My Mind” is a fantastic track, one that could be played alongside classic Deep Purple. You’ll swear it’s an unreleased track, or that Ritchie Blackmore finally snapped out of his renaissance phase and contacted his old mates for one more go-round — it’s that good! In addition to Iommi and Gillan, the song also features former Metallica bassist Jason Newsted, additional guitars provided by HIM‘s Mikko Lindstrom, Iron Maiden‘s Nick McBrain handling the drum tracks and rounding out the star-studded band is former Deep Purple keyboardist Jon Lord. The second track, “Holy Water”, is also very good and leaves you wanting to hear more.

With Heaven & Hell no more and Black Sabbath in limbo, one can only hope that Tony Iommi and Ian Gillan set aside some more time in the near future to carve out more music.