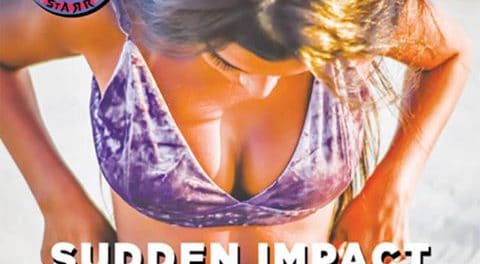 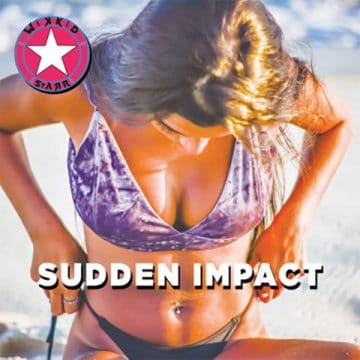 Review:
For some reason, when I was hit up to review the latest release from L.A. rockers Wikkid Starr, my brain immediately pictured one of those project bands you see on Sleaze Roxx. You know the ones, made up of some of the cool “replacement” musicians in bands like Quiet Riot, Ratt, Pretty Boy Floyd, etc. Before I could get a chance to look into it, my wife pulled up the video for one of the band’s older tracks chuckling “Oh, it’s that band with that odd looking shirt open to the navel guy.” Funny thing is, I immediately knew what she was talking about and my brain remembered the group’s frontman Toney Richards.

Now it’s not like Wikkid Starr are these new kids on the L.A. block. Richards is set to put out the band’s sophomore release later this month after five years of rocking shows with various band members from the Strip to New York and parts of South America in between. And not just club shows for a handful of regulars saddled up to the bar but gigs getting the stage heated up for many ’80s vets including the BulletBoys, Dokken, Faster Pussycat, Great White, Pretty Boy Floyd, one of the many versions of L.A. Guns, and many more. Bottom line is, word on the street is that Wikkid Starr are a tight blast of old school hair metal known to rock some cool originals as well as respectable renditions of a few ’80s classics. It’s enough to give anyone the benefit of the doubt and a full open-eared listen. And if those aren’t enough reasons, Richards and the boys are already gearing up to put out third record Return To Glory (this one for Lions Pride Records) next year but that’s a whole other review for down the road.

Looking over the track listing for Sudden Impact, it wasn’t lost on me that despite the wildly spelled name of Wikkid Starr, that same over the top attention wasn’t put into the song titles leading me to even wonder if some of the songs were covers. I don’t think anyone would fault me for wondering if “All Hell’s Breaking Loose” and/or “Rocket Ride” were loving homages to old KISS tunes but trust me when I say, not only are they original Wikkid Starr tunes, they are both pretty cool tunes. Even kick off album video single “Hot Love” had me curious to hear a modern rocked-up version of an old T.Rex song but again, totally a Wikkid Starr original. Despite perhaps the use of very familiar song titles, Sudden Impact does have a lot of good fun, energetic rock and roll tracks.

Starting off with latest video “Bring It On”, Wikkid Starr kicks out a record of romping ditties that fans of Dangerous Toys and early L.A. Guns would dig. Yeah, it’s not rocket science but we’re talking ’80s inspired sleaze rock so why wouldn’t a bar full of rockers not want to just repeat the title of “Out In The City” over and over during the choruses while they pump their fists in the air. Richards and crew even say so on “All Hell’s Breaking Loose” — “It’s a Wikkid Starr party on a Saturday night!” With some solid hard riffs, great air guitar solos, and a bunch of sing-along lines, by the time “Hot Love” rolls in, I’m ready to get out of lockdown and back into a crowded bar of loud rock and roll. OK, so I can’t say I’d be hard pressed to hear “Give it to me, give it to me, give it to me, la la la” over my fave Crüe or Ratt records but I got to admit, I’d have a great time at a Wikkid Starr show and at the end of the hair metal day, isn’t that what’s most important?

At first, I was digging the shuffle of “Bump & Grind” but even with my love of cheese, this one might be a tad too much for me but it’s for those exact reasons that I like the Open Up and Say… Ahh! Poison era sounding groove and grind of “Pump House.” It’s just good, simple, tongue in cheek rock and roll. After a week of work (or a year plus of self-imposed jail time), what better medicine could a rock and roll heart want and need? Pretty good break setup for the hard-edged sexual innuendo grind of “Rocket Ride,” and Poison-esque boogie woogie of “Betty Sue.” Two-thirds of the way through and so far, it’s been a fun rock and roll trip. Richards‘ “Not in it for the money honey” and I guess in 2021, that’s a good thing because rock and roll feeds the soul way more than it fills the pockets.

On the serious tip, Sudden Impact winds down with the finger pointing blues groove of “Snake In The Grass,” relationship rocker “Partners In Life,” and ode to the daily work grind “Uncle Sam,” a chunky riff of a tune heavy on the bass and topped with tailor made guitar solo. It definitely would have been a great way to end the album but alas, Wikkid Starr attempt to take it home by way of the heart ala “You Just Don’t Understand.” Unfortunately, the sentimental path veers way too close to the Rolling Stones‘ “You Can’t Always Get What You Want,” and Poison‘s “Something To Believe In.” A couple of great songs to take inspiration from when penning a rock ballad but in this case, Wikkid Starr swerve way too close nearly hitting both songs head on. Sure, the average musician could round up three chords and medley pretty much every ’80s hair power ballad with ease, but after eleven solid originals, I am inclined to believe that Richards could have come up with something not so obviously close to tunes most of the world knows intimately.

In 2021, few will confuse Wikkid Starr with the likes of their influences and they surely will never replace those beloved ’80s bands that have come and gone, but over the past five years, Toney Richards and his revolving door of a group have delivered enough solid rock and roll to at least bandage up a hole or two left behind. While rock and roll surely ain’t dead like Gene Simmons says, the releases are few and far between aside from mostly those of the melodic rock variety and even if the options of live rock and roll are iffy at the moment, it doesn’t hurt to at least have something to pop in the player while burning up the road. Few things make a day holed up inside better like getting in the car and cranking up some tunes even if it’s just to burn some gas from point A to point B and back. Wikkid Starr‘s Sudden Impact is more than capable enough of getting the job done. Simple, riff-loaded, loose energetic rock and roll stuffed with dirty guitars, thumping low end, and raw vocals ranting on about sex, fun, rock and roll, and yeah, even a few of the serious things everyone likes to vent about from time to time. It might not ever make your very hairy top whatever of all-time but for something new to tickle the ears, it’s definitely worth the listen.