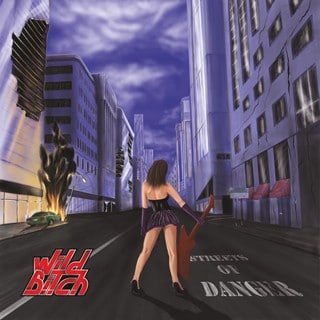 Review:
All too infrequently does an album come along that, by its shear awesomeness, puts any and all releases before and after it to shame. That sets standards few will reach. That places the rock n roll bar so high that the lucky listener knows that they are experiencing something very very special — a work of pure unadulterated art. Where the musicians put everything they had and then some into the effort. All their collective energies to create, what, in a just world, would be received by all with open arms and open ears. That could move mountains, cure disease, hell, even have the same impact as finding the Virgin Mary burnt into your morning toast.

I am quite sure many readers have listened too and/or owned such an amazing piece of musical bounty. Some are mainstream chart-toppers and others are your little secret — your cherished underground heroes. To share would mean the end. You won’t even share with your closest friend, for good reason. If the masses know, then your heroes go. Why would you want to share such a treat with the rest of the world? Well, in the case of Wild Bitch‘s Streets Of Danger, the simply amazing release from Italy’s newest unknown sensation in progress, I am sharing in hopes that these metal prodigies get the support they deserve to keep making music for a good long while.

OK, enough hyping and posturing the unknown, but trust me, Wild Bitch will be known. I alluded earlier to the few albums that touch greatness, albums like Guns N’ Roses‘ Appetite For Destruction, Boston‘s Don’t Look Back, Def Leppard‘s High N Dry, Whitesnake‘s Slide It In and AC/DC‘s Highway To Hell (or Back In Black for others). These albums are all flawless from start to finish, precisely the way Streets Of Danger plays out, perfect from the first note of “Fight And Dream” to the last piano key strike from “You Taught Me To Live” — the album is simply stunning. I know you are reading going, ‘these records are truly epic and those are big shoes to fill’, but fill them the boys in Wild Bitch do. I can only imagine the level of effort that will come next.

Every single element of Streets Of Danger is like a school of songwriting, musicianship and production technique — and this from an indie release recorded in drummer Andrea Vedorin‘s personal studio. Describing does not do justice the level of intricacies for any and all music geeks to enjoy and clamor over. From guitar fills galore to double kick drumming, triplets and fills, to the 11 plus minute long metal ballad “You Taught Me How To Live” (strongly reminiscent in coolness to Guns N’ Roses‘ “November Rain”) that features some stunning piano playing. “Neoclassical Dream”, like it sounds, opens ala Brighton Rock‘s “Jack Is Back” with a monster of an organ intro followed by some of the catchiest metal fueled rhythms I’ve heard in ages. The album, and band’s style, pays homage to many classic metal recorded elements. I hear influences from Helloween, Lizzy Borden, Stryper (think Soldiers Under Command), Scorpions and Iron Maiden to name a few. Valentino Francavilla is a great guitarist and his voice is very strong and quite unique, and of course second guitarist Marco Scattolin and bassist Davide Ravida are two very solid and talented musical forces contributing greatly to the effort.

I suggest reaching out to Wild Bitch and begging with every ounce of your being in hopes of acquiring this CD before a major label like Frontiers snatches them up, which someone like that certainly will, so you can have the soon to be most sought after independent collectible CD in years!