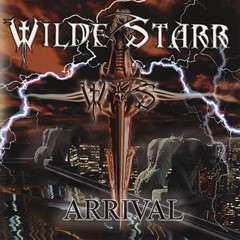 Review:
WildeStarr released their debut album back in 2009, but they are still pushing it hard today in hopes of making a ripple in the North American market. The album, entitled Arrival, is the brainchild of guitarist Dave Starr and singer London Wilde. Dave Starr, as you may recall, is the former bassist for power metal acts Vicious Rumors, Chastain, and Bay Area thrash band Laaz Rockit. London Wilde might not be familiar to you, but she should be — she has a powerful voice and her style isn’t that far removed from Queensryche‘s Geoff Tate or Fate Warning‘s Ray Adler.

Wilde can reach those high notes, as her shrieks can make the hair on your arms and the back of your neck stand on end. Starr is known for his bass playing but is a surprisingly gifted guitarist and his solos an Arrival have razor-sharp precision and he plays just enough as to not enter ‘guitar-wankery’ territory. In addition to guitar Starr also handles bass duties, while the band is rounded out by drummer and former Vicious Rumors bandmate Jim Hawthorne.

Arrival isn’t too long at 10 tracks — it’s perfect. The song sequencing is great, starting with “Rose In The Dark” which has a symphonic metal intro but shifts into power-metal mode and sets the tone for the album. The guitar tone sounds fantastic and the vocals are crisp and dominant. Unfortunately the bass and drums get buried by the vocals, guitar and atmospheric keyboards at times. The only track that lost me a little was “Nevermore”, a ballad that just didn’t grab me like the rest of the album. The song marks WildeStarr going into cruise control for the first time on the album, fortunately the record closes out on a high note with one of the highlights “Voice In The Silence” and “The Chain.”

WildeStarr‘s Arrival is a memorable, no frills, female fronted traditional power-metal band that you’ll definitely want to keep an eye on in the years to come.