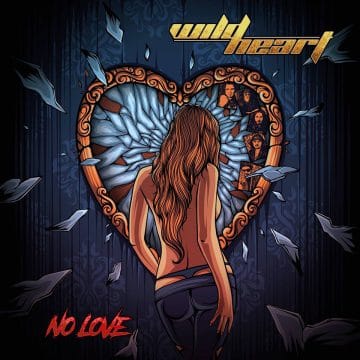 Review:
WildHeart — not to be confused with ’80s UK band The Wildhearts — are a young band out of Belgium. No Love is their second release, following 2016’s self-titled debut album. Their bio identifies them as a band, “…with a great love for the 80s and the classic hard rock and glam metal from that period. Bands such as Whitesnake, Ratt, Mötley Crüe, Dokken, Van Halen are their inspiration.”  Well, can’t we all identify with that?

Rant time — Readers already know by now how I feel about useless lead-in tracks that serve zero purpose beyond padding the track count. Coming in at a meagre 1:12, “The Mirror” falls firmly into that territory. It provides no insight into the band, nor does it offer a lead-in to the next song. End of rant.

Moving on to the album proper, “A Stranger’s Eyes” begins with a gentle note progression, before hitting the distortion pedal. It’s old-school melodic with a chorus hook. “Nothing But Trouble” is a cross between melodic tempos and aggressive guitar lines. With “Dutch Courage”, I’m picturing big haired guys in tight pants with red tassels hanging off their sleeveless arm-bands, and columns of fire erupting behind them. It is a real throwback to 1984, and that’s ok. There is a Whitesnake vibe to the guitar line in “No Love” but I’m starting to get the sense the drummer’s click-track is stuck on a single BPM setting. Every song so far has had roughly the same tempo, just a bit up from medium, despite what the guitars are laying down.

Sure enough “One Way Ticket To Paradise” is about the same. Another great guitar line that could have been improved with a faster and more aggressive beat. The vocal harmonies in the chorus do work, but that’s the thing. With every track so far being middle-of-the-road, the interesting performances no longer stand out.

I kept hoping that “Rumours” would hang on to what it built in the intro, which was very Ratt like. Unfortunately the clean guitar notes in verse left me flat. A solid bridge and really good chorus almost saved this track for me. Does anyone remember the song “Good To Be Bad” on the 2008 Whitesnake album of the same name? WildHeart wrote their own song with that title, and the guitar intro is almost as strong. I’m not crazy about Farty’s high-end vocals on this one, but there is much good to be found in track number eight. Kind of like the name Farty for a singer, as long as it’s not literal!

“Valerie” is a nicely done blues stomp. The guitars are dirty enough, with an Eddie Van Halen flourish. “Tonight We Rock” is the most up-tempo offering on this album, and also one of my least favourites. Sure, once again the guitar line is enticing, but in this case, the vocal line seems all wrong. The band’s music is absolutely firmly rooted in the ’80s sound and writing sensibility. It is also clear they have the talent to pull it off. But, to my ears — with the exception of “Tonight We Rock” — are all of average tempo, and don’t really do justice to the intensity of what the guitars are offering. Maybe WildHeart ramp up the energy live… because that would be a great show to see.

WildHeart are one of those bands that just need a little tweak here and there to refine themselves into something that could lead to bigger and better things. I hope they keep improving, because these guys have potential, from what I’ve heard on No Love.