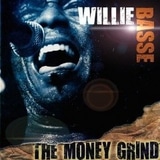 Review:
Willie Basse ranks up there with London‘s Lizzie Grey in that he is better known for the people he has played with than his own music. On The Money Grind he hopes to change that, although even if this album was flawless there is no way it would catapult him to the success of former bandmates like Slash, Paul Gilbert and Randy Castillo, all of whom flowed through the ranks of Basse‘s Black Sheep band in the early 80’s.

When I sat down and write this review I got out my old vinyl LP of Black Sheep‘s 1985 Trouble In The Streets album. It was interesting to see how Willie Basse has evolved over the years. Back then he was playing straight-ahead 80s metal and today he still does that but has also expanded his boundaries. Whether that is good or bad is up for debate, but seeing as this is a solo album it isn’t surprising that different musical feels and textures are explored.

One thing I will say is that Willie Basse‘s voice sounds as good today as it did in the 80s, in fact in might even be better! During the opening track “Danger Zone” he starts screaming like Dizzy Dean Davidson of Britny Fox, too bad the annoying chorus kills what otherwise would have been a great start.

After a short instrumental, “It’s Over” picks up where the first track left off, only with a much better chorus and a good rhythm. “U Can’t Have It All” proves to be one of the best songs on the disc, and probably the heaviest. Willie sings with a heavy gravel-throated delivery and the guitars match his screams note for note. Also be sure to check out “Yesterdaze”, a tune in which Willie Basse sounds almost identical to Warrant‘s Jani Lane. It is back to the screaming on “Reasons”, another cool track that delves into melodic rock territory.

What I don’t like on The Money Grind is the reggae flavored “Po’ Boy”. They should have taken the chorus from this song (which is its only highlight) and inserted it into “Danger Zone”, so that only one of the two songs would have been substandard. Then you have “Avarie”, a ballad just doesn’t pull on the heart-strings like a sappy ballad should. “Don’t Waste My Time” seems a bit muddled, unsure of what direction it wants to take, and as for “You’re Not There” it is probably best just to ignore it.

The Money Grind has its moments, and metal pioneer Willie Basse still sounds great, especially with a stellar production job behind the music. However at times the CD seems to lack focus, which is something I find happens a lot with solo releases when an artist wants to broaden his horizons. This album won’t be the one to allow Willie to step out of the long shadows cast by his former bandmates.