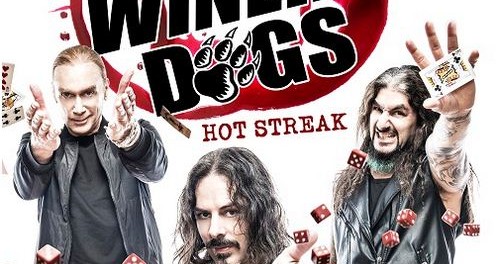 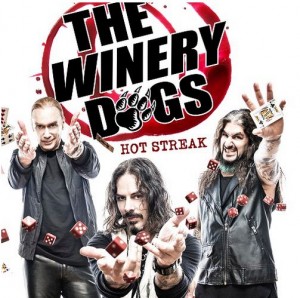 Review:
Let me state that even before listening to this album, I tried to stay as critical as I could. I was fully aware that my opinion could be very biased, due to the fact that there is little music in which Richie Kotzen is involved with that I do not enjoy thoroughly. But, bearing in mind that I didn’t go crazy about his last effort Cannibals — as I found it a bit too soft, and pop-funk oriented for my tastes — I feel that I have remained objective trying to review The Winery Dogs‘ new album Hot Streak.

In case you still do not know by now, The Winery Dogs are a three piece rock super group, which debuted a couple of years ago with their surprise knockout self-titled record. The band consists of technical powerhouses, Billy Sheehan (Mr. Big, David Lee Roth, Talas) on bass, Mike Portnoy (Dream Theater) on drums, and Richie Kotzen on guitar and lead vocals. Kotzen is unfairly mostly known for his work with Poison and Mr Big even though he has released 20 something albums during last 25 years.

Everybody who was ever a signed recording artist knows that the sophomore release is the hardest one. Not only do you have to prove to the audience that you are not a flash in a pan, but you have to withstand the pressure from the recording company to at least catch up commercially to the last effort. In case of The Winery Dogs, after their first record became a surprise hit for a lot of hard rock fans, the pressure must have been huge. When the first track — an already heavily played live “Oblivion” — resurfaced, it only added oil to the fire. The track is a very strong energetic song. It shows the players’ technical prowess, but is very catchy at the same time — two things that do not always come together.

When the album came through, I knew that with such a powerful first single, it would really be hard for the other songs to catch up to the hype. However, after going through the record, all 13 songs, I can say it with a clear conscience that it is almost completely full of splendidly written material. There are energetic tracks, like the title track, “Ghost Town” or the aforementioned “Oblivion.” There are songs here which I find all rhythm, like “Captain Love” or “Empire” while there are even some very good slower tunes like “Fire.”

All in all, while really trying hard to be skeptical, I couldn’t find a weak spot on this release. I know that tastes are subjective, but this album really appealed to me from the opening “Oblivion” to the closing track “Lamb” which starts kind of slowly, but then goes faster, with a very catchy chorus. And I think that is the secret behind this release. The songs here are from many spectrums of hard rock — fast, slow, rhythmical — but the one thing that unites them all is and the best word that comes to mind is “catchiness.” I think the songs are just written very well. I will not go into detail over the technical execution and production of the tracks, as with such musicians and a big label behind it, the only risk might have been the potential overproduction. Thankfully, that is not case.

I cannot remember when was the last time I tried to be so skeptical towards an album and at the end failed so miserably. The only thing I believe could be done better would be the graphical design of the album cover, which to me looks a bit cheesy.  This however is completely irrelevant to the quality of music. I find The Winery Dogs‘ Hot Streak is one of the best albums that I have heard this year, and maybe even one of the strongest in Kotzen’s writing career. I believe that the real challenge before these guys will be for the next record to top its predecessor. However, seeing how they pulled it off with Hot Streak, I think the chances are pretty good.

Production:
Produced by The Winery Dogs
Mixed by Jay Ruston