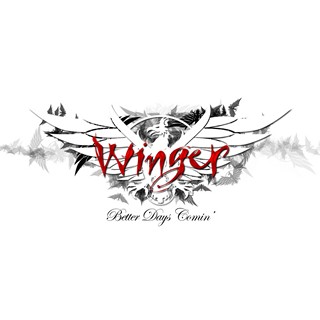 Review:
‘Better days coming’ — we all hope this is true, both in our personal lives and in rock ‘n’ roll. It certainly is true in Winger‘s case, as their new album Better Days Comin’ is the same phrase personified. Simply put, this album is very good and is easily the best, musically, they’ve ever done — and that is a tall order to fill, since Winger were one of the more talented hair bands back in the day.

There are fun songs on Better Days Comin, such as “Midnight Driver Of A Love Machine”, but most of the tracks are lessons in good rock/metal music. Several of the compositions are more on the metal side of the musical spectrum, such as “Queen Babylon” and “Storm In Me”. Reb Beach‘s legendary guitar skills are on display through much of the album, and especially on songs like “Rat Race” — which is a mean guitar school with a blazing fast dual solo. The title track is a very different type of song than what appears on the rest of the album. It has a strange, almost Southern Gospel, feel to it and is also funky in parts, where we get to hear Kip Winger doing some slap bass licks.

I was waiting for the trademark Winger ballad like “Miles Away” and “Headed For A Heartbreak”, and toward the end of the album it arrives in the form of “Be Who You Are, Now”. This song has everything you’d expect from a Winger ballad — good flow, deep lyrics, awesome vocal harmonies, and most importantly, good music and feeling. The song fits very well beside the two classic ballads mentioned earlier, and the last song, “Out Of This World”, would also feel at home alongside them. It’s an ethereal sounding song that hits with raw power and displays the skill of the classic Winger ballad, maybe even more so than “Be Who You Are, Now” — and the outro guitar solo by John Roth is superb.

Better Days Comin’ fits well alongside the classic Winger discography. It’s not an album full of filler, like so many bands have released over the last 15 years or so, instead all the songs are very well written and most could be successful singles. 2013 was the best year for hard rock and metal in a very long time, and Better Days Comin’ continues that trend of great music being released by the legends from the ’80s. It’s a sign of great things to come, and proof that indeed, better days ARE coming for all of us hard rock and heavy metal fans!