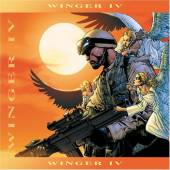 Review:
When someone is cutting down the hair metal genre, chances are Winger will be used to strengthen their case and you have to admit, Winger is partly to blame for their lack of respect. Let’s face it, some of their most popular songs were rather corny. Then the guys hit their peak with a CD called Pull, but the damage was already done and their finest release was DOA. With the musical tides changing, Winger disappeared faster than a piece of lint in Kip‘s chest hairs.

These days seem to be more favorable to 80s rock bands, so it is only logical that Winger would join the flood of deserted rockers trying for one last shot at glory. What isn’t so logical is a band that recorded “Seventeen” delivering a loosely knit concept album looking through the eyes of a soldier at war. This is as far removed from the platinum success of Winger as one could possibly get.

So the question becomes, does the album work? The answer is yes. I fully expected to hate this album because it is a progressive thinking man’s album (I usually prefer drinking to thinking). To be honest this isn’t the type of release I would normally spend money on, but that doesn’t change the fact that it contains some of Winger‘s best material and is a natural transgression from Pull.

Like most CDs, this comes with the good and bad. “Your Great Escape” is quickly becoming my favorite Winger tune ever, the guitar tone is great (like that on a forgotten album by Crush 40). That one and “Short Flight To Mexico” are the two best, and also the band at its heaviest. And maybe someone can explain why the chorus to “Blue Suede Shoes” is stuck in my head considering it is perhaps the least rocking song I’ve heard all year – but there is something addictive about it. On the other end of the spectrum is “Generica” which sounds like a bunch of leftover sounds picked off the studio floor and pressed to disc with little thought.

The question you’ll have to ask yourself is if you want to hear a mature and somewhat somber version of Winger. Will old fans buy into this new concept? I’m not sure, but if you can accept the fact that the band has grown since their heyday you should be fine. Or you can be like me and go into this CD with zero expectations and come out pleasantly surprised.