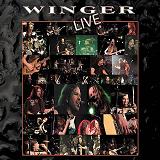 Review:
Winger, like many other hair-metal bands, are back in business again. After the release of their atmospheric comeback album simply titled IV, they went on tour and recorded one gig to be released now as a live album (which is also available as a DVD).

To quite a few Winger fans IV was too dark and didn’t appeal them very well. And Live shows this on the set-list as there are only three ‘new’ tracks included (“Blues Suede Shoes” is added as an in-studio acoustic bonus track). The main focus lays of course on their back catalog, which shows us again just how talented a band they were and still are.

All the hits are here, “Seventeen”, “Miles Away”, a stunning version of “Easy Come Easy Go” and every once in a while they throw in a not so well known song for good measure. The whole record is very entertaining and shows four excellent musicians in great form. As is the case with live albums, this probably won’t win the band any new fans, but if you like Winger this one is a fine example of how a live album should be done. It seems to me that there was some studio work done on here, but I’d take a fine sound over a bad mix anytime as long as it still feels ‘live’ – as is the case on Live.

A couple of critical points however. In this age, when everybody can download an album within minutes, why not release the whole thing as a CD/DVD combo to give it a bit more value for your money? Instead fans have to pay twice! Also, what is up with the inclusion of “Generica”, arguably the worst song on IV?