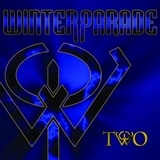 Review:
Hailing from Norway, Winter Parade have recently released their second CD, skillfully entitled, Two. Though it is well-written and well-played, one may find it difficult to listen to, if simply for the fact it sounds very dated. Depending on your own personal taste, that may, or may not, be a good thing.

Heavily influenced by the Billboard-charting bands of yesteryear, Two is easy on the ears, and catchy, but the melodies of bands-past, such as Survivor, Kansas, and Toto, to name but a few, immediately come to mind. Personally, I enjoy this style of music. Anyone who loves their rock-and-roll majestic, with a squeaky-clean production, ala Journey, will definitely sink their teeth into this. It is a nice departure from the current MTV-trend of bands churning out a couple of chords, and complaining how miserable life is. Two is very refreshing in that regard.

It is nice to hear three musicians who know their instruments, and how to make them work, but I would like to hear a little more originality. It is one thing to be influenced by other bands, but I think Winter Parade need to distance themselves a bit from their peers, and work more on a sound that is their own. If you can get past that, and AOR-style rock is your preference, then I would strongly recommend picking Two up.