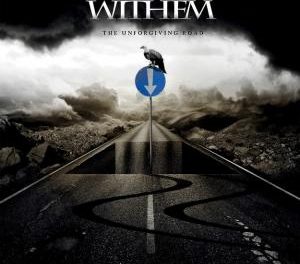 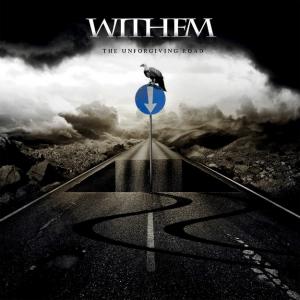 THE UNFORGIVING ROAD
To be released on June 3, 2016 (Frontiers Music Srl)

Review:
Withem are a progressive metal band from Norway and The Unforgiving Road is their second album. I had never heard of them before. This is their first release through Frontiers Records, a label that just keeps on producing like no other out there.

The progressive metal scene is heavily overcrowded, with very few glimpses of distinction or even enjoyable music being released except for a limited group of seasoned bands. In my book, there are two things that kill many prog metal releases: unnecessary over complicated composition and/or bad vocals. And that is mostly what I expect when I listen to a new band. But in this case, I was pleasantly surprised with The Unforgiving Road.

On the composition side, it has a very healthy amount of melody, huge but not overly complex compositions, good songwriting and great instrumental performances. On the vocals side, I believe that is mainly what makes or breaks bands in the genre because many singers out there are just unable to hold their ground with so many changes happening in the music or spend the whole time straining their voice to keep up. Thankfully, this is not the case with Withem. I’m glad to say that Ole Aleksander Wagenius is right on point here, his voice is clear and fits the melodies perfectly through both the slow and heavy parts.

What most surprised me is that Withem‘s music is extremely catchy and melodic, something rare in the prog world. In fact, Withem‘s The Unforgiving Road reminds me a lot of Seventh Wonder and Mind’s Eye, two bands well-known for that, and a factor in which production plays an important role. On The Unforgiving Road, the mix was done by guitarist Øyvind Voldmo Larsen and is another point in favour as the sound is dynamic and constrained showing all the layers, not favoring any of the musicians or excessively sharp with cropping which is so common these days.

Every member of the band does a great job, but I feel that the keyboards recorded by guests Espen Storø (Circus Maximus) and Neemias Teixeira (Sigma Project) are worth mentioning as they play a paramount role on this album, they are almost everywhere and bring a lot of melody and emotion to the songs. Unlike many of my fellow Sleaze Roxx writers, I’m actually a big fan of keyboards — ever since the golden days of Savatage, I came to love them. Still, I understand that they do not belong in every band (e.g. Iron Maiden during the Virtual XI era!) but when well placed and performed, they definitely can add a lot to the music and The Unforgiving Road is a great example of this.

This is a concept album with an intro, outro, and nine songs in between, much like in the case of Dream Theater‘s Scenes from A Memory and Mind’s Eye‘s A Gentleman’s Hurricane, songs can be listened to separately but are made greater as a whole. Unfortunately, I only have a digital copy for review and haven’t quite “got” the complete story yet, but the songs are emotive, packed with energy and emotions. I look forward to getting a physical copy to immerse myself in the story.

There’s not really much negative to say about The Unforgiving Road. It’s not an album that breaks any new ground on the progressive metal scene, but it sure as hell is an entertaining and worthy addition from a promising new band. I’ll be on the lookout for Withem‘s future releases. I’m sure that with Frontiers backing them up, they’ll get a lot more exposure and continue to deliver quality albums. If you’re a fan of the more melodic side of progressive metal, check out Withem‘s new album, you’ll surely enjoy it.

Reviewed by Eduardo for Sleaze Roxx, May 2016

Withem – In The Hands of a God (Official Audio)